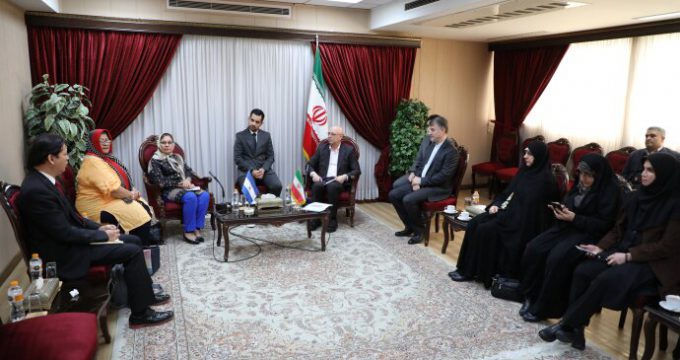 The Rector of the National Autonomous University of Nicaragua UNAN-Managua, Ramona Rodriguez, has called for using the experiences of Iran for developing knowledge-based centers.

“In recent years, growth and technology centers have been set up in Nicaragua, and we would like to use Iran’s experiences to strengthen and grow these centers and knowledge-based companies,” she said.

Rodriguez made the remarks in a meeting in Tehran on Thursday with the Iranian science minister, Mohammad-Ali Zolfigol, IRNA reported.

During the meeting, Rodriguez welcomed Zolfigol’s proposal about starting a system of needs and ideas and Iran’s readiness to share experiences with Nicaragua.

She went on to say that in Nicaragua, there is a national innovation center that operates under the supervision of the president and is in charge of coordinating the various technology and innovation sectors of the country.

“We also intend to launch a center like the system of ideas and needs,” she added.

The Nicaraguan official cited Iran’s experience in setting up technical and vocational universities for training specialized forces to be very important and asked Iran to share its experiences in this field with Nicaragua.

Within the framework of the joint committee for scientific and technological cooperation, the transfer of these experiences should be pursued, she stressed.

The Iranian minister, for his part, said that after the victory of the Islamic Revolution, notable achievements have been made in the country’s higher education sector, including ranking first in the region by publishing 78,000 articles in international journals in 2022.

When innovative ideas reach the stage of commercialization and presentation in the market, researchers can establish a knowledge-based company, he said.

The issue of setting up centers for teaching the Persian language in Nicaraguan universities was also proposed by the Iranian science minister.

In July 2022, Peyman Salehi, the deputy science minister, said despite U.S. sanctions, the international activities of Iranian scientists have increased year by year, so that more than 35 percent of Iranian articles in Scopus have been multi-national projects.

He made the remarks at the COMSTECH (the Ministerial Standing Committee on Scientific and Technological Cooperation of the Organization of Islamic Cooperation) ceremony.

Out of a total of 77,000 articles published by Iranian scientists in the Scopus database last year, 35.7 percent were related to international joint activities. Despite the sanctions, the amount of joint scientific activities of Iranian researchers has increased every year.

Iranian scientists are not limited by geographical and political borders, and apart from multi-national projects, the increase in Iranian researchers’ citations also proves this issue.

Leader of the Islamic Revolution Ayatollah Seyyed Ali Khamenei designated the new Iranian calendar year, which started on March 21, as the year of “Production: Knowledge-Based and Job-Creating.”

There are more than 7,000 knowledge-based companies operating in the country, offering advanced products and services in various fields of technology to domestic and foreign markets, and some of them have entered international markets.

Iranian knowledge-based companies marketed their products in 70 countries, and in some global markets have overtaken European and American companies, Siavash Maleki, deputy head of the Innovation and Prosperity Fund, has said.

Exporting technological products of Iranian knowledge-based companies is one of the important and key programs of the vice presidency for science and technology, and in this regard, the Iranian houses of innovation have been set up in several countries to develop the global market for knowledge-based products.