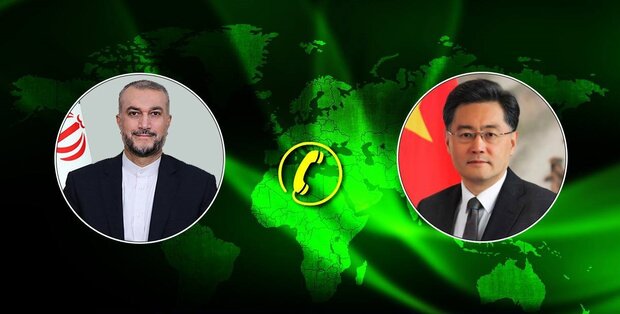 Iranian foreign minister held a phone call with the newly appointed Chinese Foreign Minister Qin Gang during which the Chinese side invited AmirAbdollahian to visit Beijing.

AmirAbdollahian congratulated the Chinese government and people on the arrival of the new Chinese year and wished success to Gang in his new post as the new Minister of Foreign Affairs.

The two foreign ministers exchanged views on the latest situation of bilateral relations as well as regional and international issues.

Referring to the recent successful visit of the Deputy Prime Minister of China to Tehran, the top Iranian diplomat attached great importance to continuing the exchange of high-ranking delegations between the two countries in deepening the comprehensive strategic partnership between Iran and China.

Emphasizing the importance that his country attaches to the development of relations, Qin Gang emphasized using all opportunities in that direction, including the consultation of foreign ministers and the exchange of high-ranking delegations, and invited AmirAbdollahian to visit China.

January 20, 2023 no comments
COVID-19 kills 2 more Iranians over past 24 hours
Export from Kermanshah to Iraq hits over $2 bn