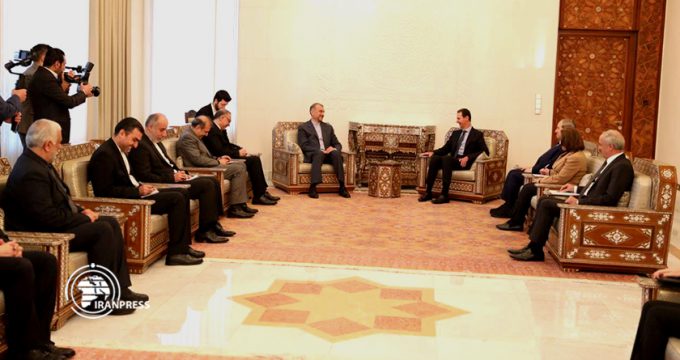 Iran FM: Iran will continue its strong support for Syria, seeks all-out expansion of ties in all areas

Iran’s foreign minister says the Islamic Republic will continue its strong support for Syria, calling for further expansion of all-out relations between the two countries in all areas of cooperation.

Hossein AmirAbdollahian made the remarks in a meeting with the Syrian President Bashar al-Assad in Damascus on Saturday.

AmirAbdollahian welcomed the expansion of Syria’s foreign relations, saying this issue indicated the Arab country’s importance and significant position in the region.

The Iranian foreign minister was referring to a growing trend of detente between the regional Arab countries and Syria, which most recently saw the United Arab Emirates’ foreign minister paying a second visit to Damascus since the outset of foreign-backed militancy and terrorism in Syria in 2011.

“The Islamic Republic has continuously emphasized [the importance of] a political approach over the war [and the military] approach. Therefore, it welcomes positive developments in Syria’s political ties with other countries,” AmirAbdollahian said.

He pointed to an invite that has been extended by Assad to Raisi to visit the Syrian capital, expressing certainty that such a trip would pave the way for further development of friendly and bilateral relations between Iran and Syria across various areas.

For his part, Assad described Iran as the closest country to Syria, which stood by its side during the foreign-backed war, adding that Damascus will never forget the support provided to it by the Islamic Republic.

Iran was the first country to rush to Syria’s assistance following the outbreak of the foreign-backed violence in the Arab country. Back in 2017, military advisory assistance provided by the Islamic Republic helped the Arab nation score a monumental victory over the Daesh Takfiri terrorist group.

The Syrian president further outlined the latest political and diplomatic developments that concerned his country, laying emphasis on the need for the continuation of consultations and coordination between the two countries in various important and strategic bilateral and regional issues.

The Islamic Republic is Syria’s partner, Assad said, adding that the two countries will continue to stand by each other and support each other in various areas.