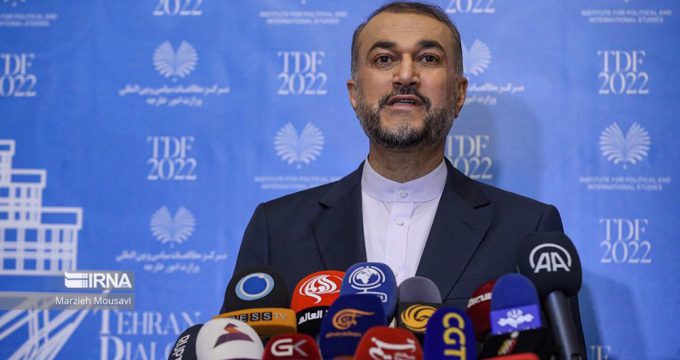 Iranian Foreign Minister Hossein AmirAbdollahian has launched a diplomatic campaign with the purpose of countering the sacrilege of Islamic sanctities.

Over the last few days, two blasphemous incidents took place that struck a raw nerve.  Itamar Ben Gvir, a leader in Israel’s far-right Jewish Power party, stormed Al-Aqsa Mosque last week immediately after taking over as the minister of national security in the new Israeli government. A longtime extremist, Ben Gavir did so under the protection of occupation forces.

The provocative move sparked widespread uproar in the Muslim world given the lofty status of the Mosque as the first Qiblah. The Ben Gavir controversy came simultaneously with outrageous cartoons published by the French satirical magazine Charlie Hebdo. The obscene cartoons were widely considered sacrilege as they depicted Iranian religious and political officials in a very improper way.

Iran was quick to respond to both provocative moves.  Iranian Foreign Ministry Spokesman Nasser Kan’ani has strongly condemned the desecration of al-Aqsa Mosque by Ben Gavir and described it as “a violation of international law and an affront to the values and sanctities of the world Muslims.”

Iran’s response to the French magazine was multi-layered. First, AmirAbdollahian condemned it on Twitter. Then, French Ambassador to Tehran Nicolas Roche was summoned to the Iranian Foreign Ministry on Wednesday.

Kan’ani said France has no right to justify insult to the sanctities of other nations and Islamic countries under the pretext of freedom of speech.

The Iranian foreign minister spoke with a number of foreign officials to discuss the provocations of Ben Gavir and Charlie Hebdo, among other things.

First of all, AmirAbdollahian spoke to the Secretary General of the Organization of Islamic Cooperation Hissein Ibrahim Taha about the two issues. He appreciated the stance of the OIC chief and his immediate condemnation of the defiling of al-Aqsa Mosque by the Zionists, according to the Iranian foreign ministry.

Condemning Charlie Hebdo’s insulting move, Taha said, “We are looking into the issue to give an appropriate response.”

The recent cases of desecration of Islamic sanctities once again highlighted the need to set up mechanisms for standing up to insults given that such cases are not the first ones. Iran appears to be pushing for such mechanisms within the Muslim world.

In his conversation with the Kuwaiti counterpart, AmirAbdollahian condemned the recent desecration of the al-Aqsa Mosque by the Zionists and called for coordinated and joint action by Muslim countries in order to preserve the historical and legal status of the mosque. He also underscored the need to put a legal mechanism in place to stop insults to Islamic sanctities, according to the Iranian foreign ministry.

Al Sabah, for his part, welcomed Iran’s proposal and initiative that the OIC take action in concert to stop the sacrilegious acts of the Israeli regime that disrupt regional peace and stability.

He then pointed to the dark record of the French magazine Charlie Hebdo in insulting the Prophet Muhammad (Peace Be Upon Him) and deplored its recent insulting cartoons. Al Sabah said insulting religious authorities and leaders is an affront to all Muslims.

The Pakistani foreign minister also voiced concern over the continuation of the Zionist regime’s aggressive policies and condemned its moves to desecrate al-Aqsa Mosque. He added that the silence of world countries toward injustice in Palestine must end.

He referred to the bad record of the French magazine Charlie Hebdo and its insult to the Prophet Muhammad (Peace Be Upon Him), religious values and the Marjaiya. The Pakistani foreign minister said Islamabad is prepared to work with other Muslim countries and the Organization of Islamic Cooperation to fight Islamophobia and the desecration of Islamic sanctities.