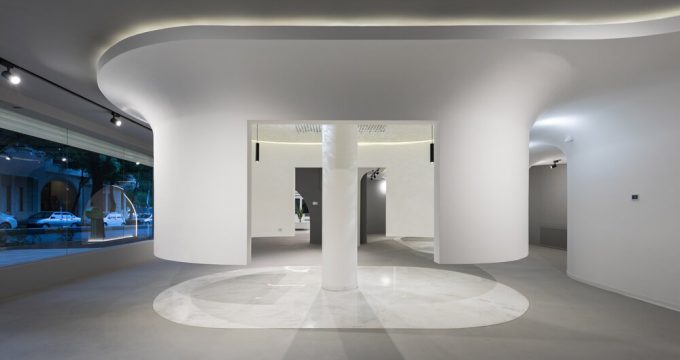 The AMP is a global architecture award that recognizes design excellence. It was launched by the Farmani Group, a Los Angeles-based organization, which curates and promotes photography, design and architecture.

Maraajaan Gallery located in the central Iranian city of Isfahan was selected as a winner in the Other Interior Design category. The Iman Aminlari Architecture Studio has designed the gallery.

According to a text description provided by the studio, “Curved forms make the space melodious, lighter and visually expanded.”

“The idea of oval semi-open spaces with suspended walls was formed to provide flexibility of function and lightness of space for better use in larger exhibitions, and to create a dynamic atmosphere and circulation,” the studio added.

“A House for Two Generations”, a residence designed and implemented by the Super Void Space studio in Tehran, won a prize in the Interior Design section.

“People from two generations with different attitudes and desires living in the same house and believing they belong to that house was all we were looking for in this project,” the studio said.

“The old apartment was designed with so many additions and omissions. The most important immutable remains were the columns between the halls and the level split between the entrance and kitchen. The main idea was to change these items to create a box in the corner of a white shell that houses the kitchen and dining room next to the terrace, a white box containing a combination of a gray dining area and a wooden kitchen,” it explained.

It was designed in the northeastern Iranian city of Mashhad by Afshin Khosravian and Associates.

The company said, “Mayan Villa is located on the outskirts of Mashhad with a history of 1800 years… Connecting with the physical and historical background, providing a model compatible with nature and climate of the region, creating quality spaces of the economical type, using sustainable indigenous materials, reducing energy consumption and zeroing it out in summer through indigenous approaches, and using regional handicrafts were our approaches in design.”

The building tries to offer an alternative to conventional models of dwellings, which has resulted in dense building envelopes that lack a dialogue with their surroundings.

Located at the intersection of two main streets in the Velenjak neighborhood of Tehran, the Hitra Office Building was awarded in the Commercial Architecture section.

Hooba Design Group, the designer of the building, said that it reconsidered the morphology of a typical office building to enhance the lighting quality of the space and view without altering the optimum footprint of the building by reassessing regulations and limitations during the project’s primary investigations with the goal of optimizing natural lighting and view.

The 7th annual Architecture MasterPrize awards ceremony was held on November 24 at the Guggenheim Museum Bilbao, where more than 200 guests from over 71 firms were present.

In the photograph section, the Persia Photography Center was honored for Kamran Street No.4 Residential, Kohan Ceram Building and Asalak Villa, all located in Tehran.