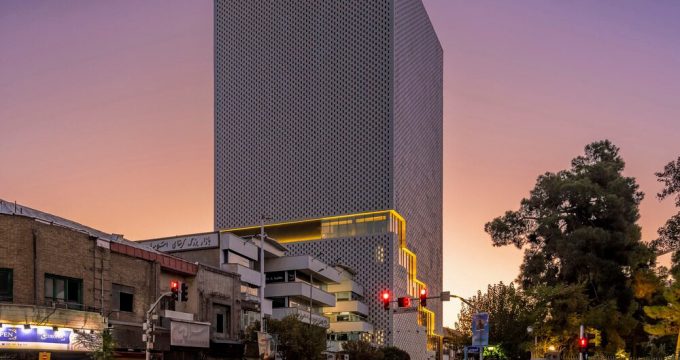 The new Plasco Building in Tehran has won the Prix Versailles 2022, a world architecture and design award which is presented by the World Prix Versailles Organization in Paris, France.

The building earned the award for shopping malls in the Africa and West Asia regions.

The new structure has replaced the 17-story commercial center that totally collapsed as a result of a raging inferno on January 19, 2017. The incident claimed the lives of 22 people, including 16 firefighters.

The new commercial center project was implemented from 2018 to 2021 in 15 stories and 5 basement levels by Gozineh Consultants and Bastanpol Engineering Group with contributions from the Sheedlight Co. in lighting design and Paya Bana Afarin in the heating, ventilation and air conditioning design.

According to a text description provided by the architects, they have dedicated a floor to build a memorial space for the victims, which was the most flexible area to represent the design concept.

Due to the direct access to the adjacent pedestrian walkways, the ground floor and the fifth floor with its connection to the remaining building’s rooftop was the most appropriate location for a memorial for the victims of the incident.

The architects said, “As a memorial building, this project does not directly refer to the tragic collapse.

“We believe that a realistic representation of the incident, instead of presenting a live, dynamic memory, captures a momentary picture and indeed ruins it.

“In this way, we evoked abstraction. We were searching for new ways to elaborate on the event and generate a new kind of meaning. Fragmentation of the form drags the audience’s attention to the disaster.

The fragments are suspended in a way that forms a cavity at the center. This opening is a museum where the audience is separated from the street chaos and leads them to the roof garden on the top of the 5-story building.

“In fact, the museum is the path that goes through the building and revives the memory in visitors’ minds. Despite the museum being removed from the project during the construction due to a mistake in the municipal permit, its effect remains in the volume, thus, it will remind us of the incident and will be a memorial for the martyrs forever.”

The winners of the Prix Versailles in the categories of airports, university campuses, passenger stations, shopping centers and sports facilities will be announced officially at UNESCO Headquarters in Paris on Thursday.