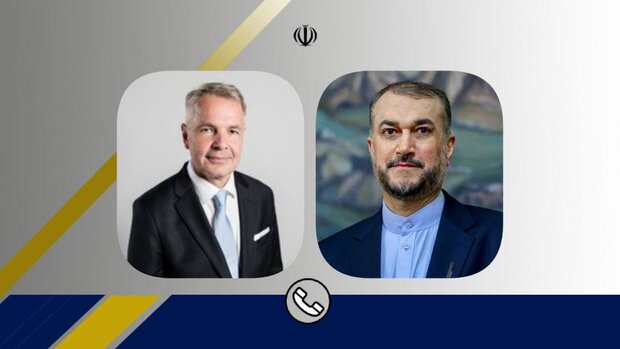 Saying that Iran opposes the continuation of war, including in Ukraine, the Iranian Foreign Minister said that the uncontrolled shipment of US and European arms to Ukraine has further complicated the situation.

In a telephone conversation, Iranian Foreign Minister Hossein Amir-Abdollahian and his Finnish counterpart Pekka Haavisto discussed the latest state of bilateral relations, recent developments in Iran, the issue of Afghan refugees and displaced people, and other issues of mutual interest.

The phone conversation was initiated by Finland’s foreign minister.

Amir-Abdollahian pointed to Haavisto’s visit to Tehran last year and said ties between the two countries are on the right track.

On the Ukraine crisis, the top Iranian diplomat said the Islamic Republic of Iran opposed the continuation of war, including in Ukraine, and it believes that the uncontrolled shipment of US and European arms to Ukraine has further complicated the situation.

He also briefed the Finnish foreign minister on the latest state of the sanctions removal talks.

Finland’s foreign minister thanked Amir-Abdollahian for briefing him on the state of the sanctions-lifting negotiations and reaffirmed his country’s support for the revival of the Iran nuclear deal, JCPOA.

The two foreign ministers also pointed to the 90 years of diplomatic relations between Iran and Finland and underlined the need to strengthen bilateral ties while discussing some consular issues.