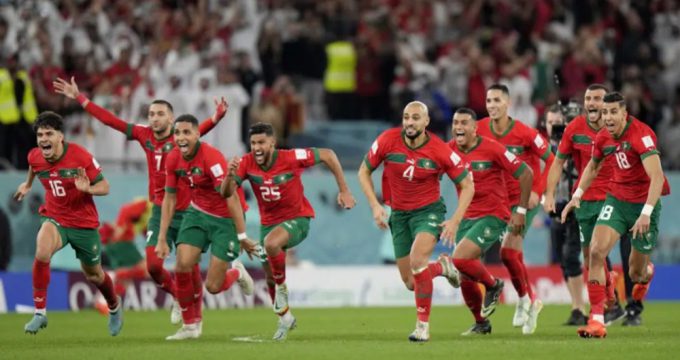 Iran’s foreign ministry spokesman on Wednesday felicitated Morocco after the North African country made history by becoming the first Muslim and Arab country to stream into the quarterfinals of a FIFA World Cup.

Atlas Lions caused one of the biggest World Cup upsets on Tuesday night after defeating formidable Spain in the penalty shootout at Education City Stadium in Qatar.

“We gladly congratulate the honorable Moroccan nation for their national team’s victory and their qualification to the quarter-finals of the World Cup,” Nasser Kan’ani wrote in an Arabic post on his Twitter page.

“We also congratulate the players and the coaching staff, wishing them success in the coming stages.”

The Morocco national football team, nicknamed “the Atlas Lions”, knocked Spain out of the marquee football competition in the penalty shootout on Tuesday, with Spanish-born Achraf Hakimi scoring the decisive spot-kick after Spain squandered all three of their attempts.

During the 90 minutes plus extra time, Spain dominated possession but failed to create many clear chances against Morocco’s stubborn defense.

Moroccan players posed for a photograph with the Palestinian national flag on the field much to the joy of thousands of spectators after they became the first Muslim and Arab team to reach the final eight stage of the tournament being played in Qatar.

Importantly, Moroccon players have caught the limelight in this World Cup for their public display of support for the Palestinian cause, with many players holding the Palestinian flag on the ground during their matches.

Moroccon players held up the flag after their win against Canada last week as well, which created ripples across the world.

After the historic win on Tuesday, there were wild celebrations across Morocco, with King Mohammed VI reportedly out in the streets of Rabat celebrating.

Huge crowds could be seen in the Moroccan capital as people waved flags and let off flares.

This was only the second time Morocco featured in the knockout stages of the World Cup.