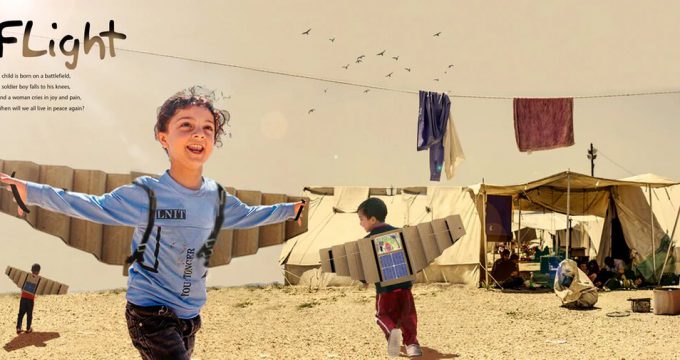 Photos of a unique village school and an outdoor game project from Iran have been awarded at the World Architecture Festival (WAF) in Lisbon.

Images of the Jadgal Primary School were the WAF delegate winner at the Architectural Photography Awards.

“Flight”, an outdoor game with solar cells by students from Tehran’s University of Art, won the International VELUX Award in the Daylight Investigations category.

The Jadgal Primary School photos by Deed Studio show views of the school located in the village of Seyyedbar in the southeastern Iranian province of Sistan-Baluchestan.

The collection won the award in Sense of Place, a category that regards photos depicting buildings or spaces in their wider context and environment.

DAAZ Office designed and implemented the structure based on a request from villagers for building a school.

The project started with an effort to change the villagers’ intellectual and social layers, empower rural women, create public participation, and turn it into leverage for building a school.

At present, apart from the educational function, this school has other functions such as a children’s play area on holidays and nights, a gathering place for villagers and their families, a place to watch movies and football in groups, a library, and a tourist residence.

The school is managed and maintained by a team of villagers and teachers, and part of the income from the tourism and needlework sections is spent on its maintenance. In this way, the school is built with the participation of the villagers and is perpetually maintained.

The Flight game has been designed for children living in refugee camps by Sajjad Navidi, Mahya Musavi-Sadr and Elham Bahadori with contributions from the professors Rima Fayyaz and Maryam Fakhari.

“Play is vital to the healthy development of a child; it is a child’s way of coping with what has happened, of relaxing and relieving tensions,” the group said in an introduction for the game.

“So we decided to choose a kind of game in which children open their hands and try to fly like an airplane which makes them feel free from bad moods and lets them fly in their dreams,” they added.

“We combined an outdoor game with solar cells due to lets kids charge the storage battery while playing in the sunlight and use the light at night. This light increases the sense of security and lets kids study at night. Also, its open structure provides a little privacy inside crowded camps. We used recycled cardboard from aid packages that are available in most camps,” the group explained.

Due to its solar absorption potential, Al-Obaidi Camp in the Iraqi province of Al-Anbar, which is home to thousands of Syrian refugees, was selected by the group to implement the project successfully.