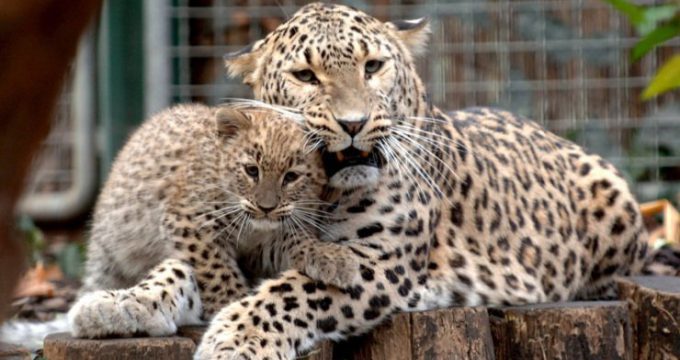 Eight Persian leopards were observed in Tandooreh National Park, a protected area located in the northeast of Iran, Mehr reported on Tuesday.

Following the favorable protection measures, endangered Persian leopards were seen during a one-day patrol in Tandooreh National Park, which is good news for the hardworking environmentalists of the region and nature lovers, Mehdi Allahpour, head of Khorasan Razavi province’s department of environment, said.

Spotting eight leopards in a one-day observation is the biggest record of observing this unique species, which is proof of the survival and dynamics of wildlife populations in this national park, he further highlighted.

He went on to note that undoubtedly, the efforts of rangers and environmental defenders will continue for the preservation of wildlife species.

Tandooreh National Park, stretching to 73,435 hectares, is a protected area located near the city of Dargaz and the Turkmenistan border. The mountainous area features deep valleys and cliffs, with Juniper woodlands on the slopes, and wooded thickets along the rivers in the valleys. Open areas are typically Artemisia steppe.

The Persian leopard is listed as Endangered on the International Union for Conservation of Nature (IUCN) Red List; the population is estimated at fewer than 871–1,290 mature individuals and is considered declining.

Persian leopard range spans 11 countries of Iran, Iraq, Turkiye, Azerbaijan, Armenia, Georgia, Russia, Turkmenistan, Kazakhstan, Afghanistan, and Pakistan. Tajikistan and Uzbekistan were part of the range but they are now considered extinct there.

Almost 80 percent of these leopards are found in Iran, followed by Turkmenistan. In the Caucasus, long-term conservation efforts have led to the unique recovery of a small population in the Zangezur region, including the south of Armenia and southeast of Azerbaijan’s Nakhchivan Autonomous Republic (Persian Leopard Working Group (2022) Range-Wide Strategy for the Conservation of the Persian Leopard Panthera pardus tulliana, draft).

Jane Goodall, the United Nations Messenger of Peace has urged lifting sanctions on protection for big cats, including the Persian leopard.

The Convention on Migratory Species (CMS) and the German Federal Agency for Nature Conservation (BfN) plan to organize a Range States Meeting to adopt a Regional Strategy for the Conservation of the Persian Leopard, in the framework of the Central Asian Mammals Initiative Program of Work.

Over the past year, a group of experts from across the leopard’s range led by the IUCN Special Survival Commission Cat Specialist Group co-chairs worked to develop the foundations for it.

According to the Department of Environment, 156 leopards have been killed in Iran from 2005 to 2014, nearly 20 leopards a year. Studies indicate that currently there are less than 500 leopards nationwide.

Persian leopards are mainly threatened by poaching, depletion of their prey base due to poaching, human disturbances, habitat loss due to deforestation, fire, agricultural expansion, overgrazing, and infrastructure development.

In Iran, primary threats are habitat disturbances followed by illegal hunting and excess livestock in the leopard habitats. The leopards’ chances for survival outside protected areas appear very slim.