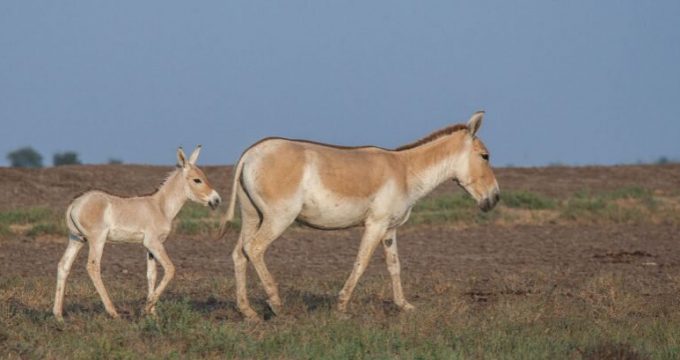 Some 175 endangered Persian zebras have so far been counted in Turan National Park, northcentral Semnan province, according to the latest census.

The Persian onager, also called the Persian zebra, is a subspecies of onager native to Iran. It is listed as ‘Endangered’, with no more than 1,000 individuals left in the wild and only 30 individuals living within North American institutions.

Persian onagers are known to inhabit mountain steppes, semidesert, or desert plains. They are usually found in desert steppes. Their largest population is found in Khar Turan National Park.

Semnan province, as the capital of the country’s wildlife mammals’ diversity, succeeded in breeding the Persian onager over the past years, head of the provincial department of environment Bahram-Ali Zaheri said.

Pointing out that zebras have a weak reproduction ability and normally one foal is left out of every three foals of this species, he stated that the probability of survival of the male zebra foal is weak, because the male zebra does not accept the male foal and kills it, and this factor causes the population of zebras to decrease.

The long gestation period and the lack of twins are among the other effective factors in reducing the population of Persian onagers, he further said.

Currently, poaching for meat and hides, competition with livestock, and drought are the greatest threats to this species. Asiatic zebras are highly and legally protected; hunting them is forbidden.

According to the IUCN, at least 40 percent of animals, insects, and plants are at risk of extinction across the world.

Iran has a high diversity of species due to geographical conditions, climatic diversity, huge water resources of the Caspian Sea in the north and the Persian Gulf, and the Sea of Oman in the south.

Unfortunately, over the past two decades, human activities have led to the alarming degradation of ecosystems, the deletion of genes, species, and biological capabilities; Human threats to biodiversity have accelerated the most over the past 50 years over the entire history of human life.