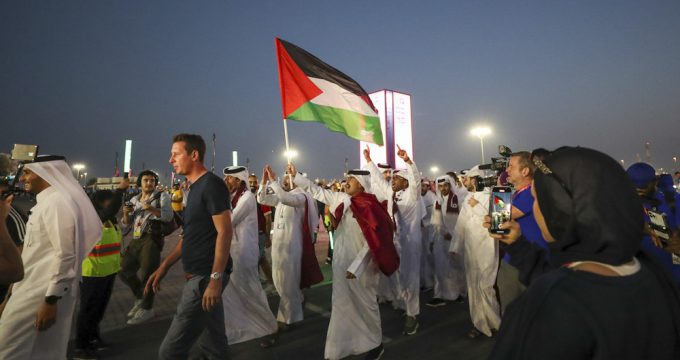 The so-called “normalization deals” between the Israeli regime and some Arab governments in recent years have failed to stamp out hatred of people in Arab countries towards the apartheid regime.

Iran’s foreign ministry spokesman Nasser Kan’ani made these remarks in a Twitter post on Wednesday, saying the World Cup 2022 hosted by Qatar has demonstrated disgust against the Tel Aviv regime.

“The FIFA World Cup 2022 in Qatar has turned into a show of (Arab) people’s disgust against the apartheid Zionist regime and the manifestation of the solidarity of nations with the cause of Palestine,” Kan’ani said.

“The occupying Israeli regime is hated by all nations,” he hastened to add.

In recent weeks, since the football carnival began in Qatar, anti-Israel sentiment has been running high, with football fans from across the world waving the Palestinian flag during the matches.

Football fans have also refused to speak to Israeli journalists covering the World Cup, citing the illegal occupation of Palestinian territories and unbridled atrocities against Palestinians.

“We didn’t want to write these words, we are not the story here. But after ten days in Doha, we cannot hide what we are going through. We are feeling hated, surrounded by hostility, not welcomed,” he said.

Dor Hoffman, an Israeli journalist, reported that a Qatari taxi driver kicked him out of his cab after he discovered his identity, refusing to take his money.

Moav Vardy, a foreign affairs reporter for the Israeli Kan 11 television channel, said he was yelled at by a Saudi fan, who told him “you are not welcome here, this is Qatar, this is our country, and there is only Palestine, no Israel.”

During the matches, the Palestinian flag has been spotted regularly over the past few weeks, amid growing awareness about Israeli aggression in the occupied territories.

Meanwhile, in another tweet, Kan’ani cited Palestinian news sources as saying that at least five Palestinians had been killed by the Israeli regime troops over the past 24 hours.

He lashed out at Western states for supporting “a racist, terrorist and occupying regime,” calling them “false advocates of human rights.”

“The false claimants of human rights have been supporting a racist, terrorist, and occupying regime for more than 7 decades, which not only commits gross human rights violations but also commits genocide against the Palestinian nation,” he stated.

Two young Palestinian men, identified by the official Palestinian news agency Wafa as Jawad and Dhafr Rimawi, aged 22 and 21, were killed on Tuesday during confrontations with the regime troops near the village of Kafr Ein, west of Ramallah.

Another Palestinian man identified by the Palestinian Health Ministry as Mufid Khalil was killed by Israeli soldiers during a military raid near al-Khalil.

Khalil was shot in the head, and at least eight others were injured, according to the ministry.

The health ministry said a fourth Palestinian died after being shot in the chest by Israeli soldiers on Tuesday during clashes north of Ramallah. Wafa named the victim Raed Ghazi al-Naasan.

Also on Tuesday, Israeli forces shot and killed a Palestinian over an alleged car-ramming attack near the Kochav Yaakov illegal settlement outside occupied East al-Quds.

The spree of killings comes as Israeli forces have been carrying out overnight raids in the northern occupied West Bank, mainly in the cities of Jenin and Nablus, where new groups of Palestinian resistance fighters have been formed.

Since the beginning of 2022, Israeli troops have killed more than 200 Palestinians, including 50 children, in the occupied West Bank and East al-Quds as well as the besieged Gaza Strip.