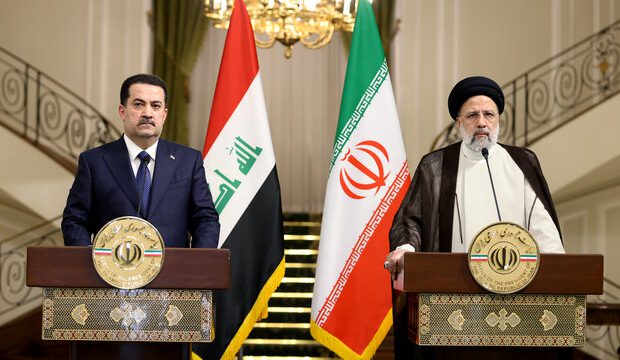 Iranian President Ebrahim Raisi said that the fight against terrorist groups and drug-smuggling gangs is among the agreements and common will of the two countries of Iran and Iraq.

Raisi made the remarks in a joint press conference with Iraqi Prime Minister Mohammed Shia Al-Sudani on Tuesday after they held a bilateral meeting.

He appreciated the Iraqi prime minister for accepting his invitation to visit Iran. “Our relations with Iraq are not ordinary relations, our relations are rooted in the beliefs of the two nations that have brought the two nations and the two governments together.”

“The peak of Iran-Iraq relations can be seen in Arbaeen rituals [which marks the martyrdom of the Third Infallible Imam of Household of Holy Prophet, Imam Hussein (PBUH) and his true companions in the Battle of Karbala]. Iraqis have a worthy host of Arbaeen pilgrims and I appreciate them,” he added.

Stating that Tehran and Baghdad cooperate in cultural, political, social, and security fields, he expressed hope that the cooperation between Iran and Iraq will be improved during the new government.

“Iranian and Iraqi governments believe that security, peace, and stability in the region are very important, and therefore the fight against terrorist groups, organized crimes, narcotics-smuggling gangs, and any insecurity that threatens the region are part of the agreements and common will of the two countries,” the Iranian President added.

Emphasizing that the security, stability, and peace of the region should be established by regional countries, Raisi said, “The presence of foreign forces in our region does not create security in any way. Just as the presence of Americans in Afghanistan and Iraq has not created security, it will not also create security in other parts of the region. Therefore, their departure from the region can definitely contribute to regional security.”

Raisi called the presence of the Prime Minister of Iraq in Iran a turning point in the relations between the two countries, saying that the negotiations between Iranian and Iraqi officials can definitely be a big step towards improving relations.

He considered cooperation in the economic and commercial fields as one of the main topics to be negotiated, adding, “Monetary and banking issues, electricity and gas export are among the topics of negotiation, and without a doubt, this visit and talks between the two Iranian and Iraqi delegations can be of great importance in resolving the issues between them.”

Iraqi prime minister, for his part, said that security cooperation between the two countries was discussed during the meeting with the Iranian President.

“The Iraqi government is committed to implementing the constitution and will not allow Iraqi territory to be used to harm any country,” he said.

Al-Sudani noted, “The Secretary of the Supreme National Security Council of Iraq is present on this visit and will meet with his counterpart to reach a working mechanism and cooperation in order to prevent and avoid any tension.”

The Prime Minister of Iraq considered his visit to Iran to strengthen the historical relations between the two countries, saying, “The people and government of Iraq do not forget the support of the Islamic Republic against ISIL terrorists.”

Al-Sudani emphasized the importance of joint cooperation in the fight against terrorism and drug-smuggling gangs.

Stating that economic issues have an important impact on the security of the region, he said, “Today we agreed to activate the economic committee meetings of the two countries.” 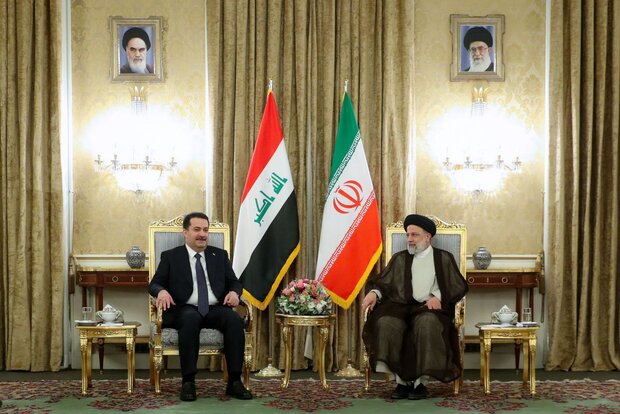 During the meeting held on Tuesday after the welcoming ceremony, Raisi said that the Islamic Republic of Iran always supports the united nation and strong government in Iraq.

Emphasizing the determination of Iran to expand cooperation and improve the level of relations with Iraq in the economic, commercial, political, cultural, and security fields, he added that Iran seeks to develop exchanges with Iraq in various commercial and energy fields. “Holding regular meetings of the joint cooperation commission between the two countries can play an effective role in realizing this goal.”

“The relations between the Islamic Republic of Iran and Iraq are privileged, and the strengthening and deepening of bilateral relations should lead to the expansion and improvement of the level of regional and international interactions in order to establish as much peace and stability in the region and the world as possible,” Raisi underlined.

For his part, Al-Sudani said that Iran has a privileged and excellent position in Iraq’s foreign policy, and the relations between the two countries are expanding in a favorable and satisfactory manner.

Al-Sudani who arrived in Tehran as the head of a political and economic delegation was welcomed by Iranian President Ebrahim Raeisi at Saadabad Complex.

In his two-day visit, Al-Sudani is set to hold meetings with the senior officials of the Islamic Republic of Iran.

Raeisi and Al-Sudani plan to hold talks as the political and economic delegations of the two countries will also discuss mutual relations and regional issues.

This trip is the first visit of an Iraqi official to Iran after the formation of the new Iraqi government.