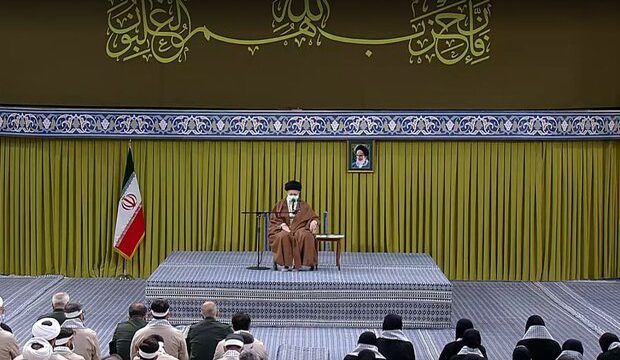 Negotiations with US not to solve any problem: Leader

The Leader of the Islamic Revolution says that negotiations will not solve Iran’s problem with the US, because it does not fulfill its obligations and constantly asks for ransom.

Ayatollah Seyyed Ali Khamenei made the remarks in a meeting with a large number of the Basij forces on Saturday morning in the Imam Khomeini Hussainiyah on the occasion of Basij Week. Five million Basij members from throughout the country also participated in the meeting via videoconferencing.

“Basij should be present in all scenes and spheres. It is not a military force per se, it is a body to serve people without any expectations. Basij forces have been successful on the scientific front, and our prominent nuclear scientists were members of the force indeed,” the Leader added.

Ayatollah Khamenei underlined that members of the Basij force sacrifice themselves to serve people, and they have fought vandals, lost lives, and sustained injuries during the recent foreign-sponsored riots.

The Leader of the Islamic Revolution also called on state officials to keep a watchful eye on unfolding developments, stressing that enemies are trying to dominate minds and influence the world’s public opinion through spreading lies and fake news.

“Basij should bear in mind that the main confrontation is with global arrogance. The rioters are either oblivious, ignorant, or mercenaries,” the Leader said.

Ayatollah Khamenei added that Iran’s battle is not with a group of rioters who have recently wreaked havoc in the country, adding “the main confrontation is with the global hegemony”.

He also repudiated the notion of negotiations between Iran and the United States in order to resolve the existing problems between the two countries, saying that Washington would not settle for anything less than getting constant ransom from Tehran.

“A group of people who claim to be politically knowledgeable, but whose analyses in newspapers and virtual space really saddens one, state that in order to end these riots, you should solve your problems with the US,” he added.

The Leader of the Islamic Revolution also noted that Iran has at times engaged in talks with the US, but it has refused to remove sanctions against the Islamic Republic and has kept them in effect.