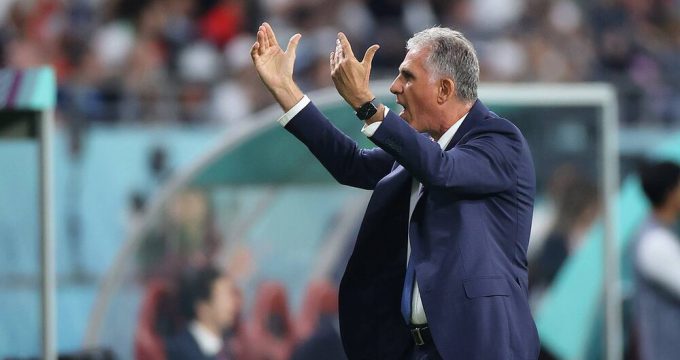 Iran played extremely poor in the first half and conceded three goals and it was too late for changing the tactic for the second half.

Queiroz made a mistake in choosing the starting lineup. Milad Mohammadi, Majid Hosseini, Rouzbeh Cheshmi, Morteza Pouraliganji and Sadegh Moharrami were Iran’s five defenders against England and it’s while Iran used to play with four defenders in the previous matches.

Rouzbeh Cheshmi is a better option to play as defensive midfielder. And it is noteworthy that Morteza Pouraliganji and Majid Hosseini had not played for Team Melli for a long time.

Dragan Skocic, who was replaced by Queiroz in September, booked Iran’s place in the 2022 FIFA World Cup, fielding Hossein Kanaani and Shoja Khalilzadeh as center-backs.
Playing with five defenders is not the way Iran played in the previous years.

Team Melli are usually playing with 4-1-4-1 or 4-2-3-1 systems and to change the system was a very risky decision made by Queiroz against England.

Experienced midfielders Vahid Amiri, Saeid Ezatolahi and Ali Gholizadeh were also absent in the first half. Indeed, Queiroz fielded a new team with a new system against England.

Iran have no choice but to defeat Wales on Friday and the coaching staff must use a familiar lineup in the match.

This is Queiroz’s third World Cup as Iran coach and he knows the players very well and he is responsible for the results.
There is no excuse.

Iran will meet Wales in a must-win game to keep their hopes alive to qualify for the World Cup next stage for the first time ever.