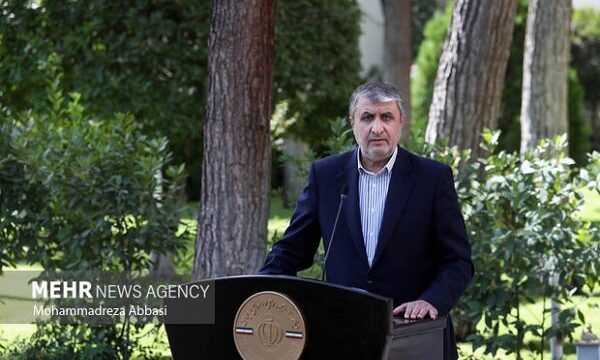 The Head of the Atomic Energy Organization of Iran (AEOI) says that the new measures taken at Fordow and Natanz sites are based on the rules and regulations of the International Atomic Energy Agency (IAEA).

Pointing to Iran’s response to the resolution issued at IAEA’s Board of Governors, Mohammad Eslami said that the AEOI has created a new capacity in Fordow and Natanz nuclear plants in line with the implementation of the law of Strategic Action Plan on the Removal of Anti-Iran Sanctions for Protecting People’s Rights.

Of course, all these measures were taken within the framework of rules and regulations of the IAEA, he emphasized.

The gas injection of new chains has started in Natanz nuclear facility, Eslami said, restating that enriching capacity in Fordow nuclear plant has increased from 20 percent to 60 percent using the existing capacity.

With the effective steps taken in this regard, the Organization will replace the centrifuges of the new generation and 6th generation with the first generation of centrifuges, Eslami continued.

As the Director-General of the International Atomic Energy Agency (IAEA) Grossi stated in his speech, political pressure and issuance of the resolution against Iran is not the solution, so problems cannot be solved by inciting accusations, he said.

The International Atomic Energy Agency should deal with issues in a professional manner and in accordance with the 2015 agreement, he said, noting that the United States withdrew from Iran’s nuclear deal, JCPOA, in May 2018 unilaterally and breached all its obligations under JCPOA.

Not only the United States failed to live up to its commitments, but also it did not allow other JCPOA parties including UK, Germany and France to live up to their obligations, the AEOI chief criticized.