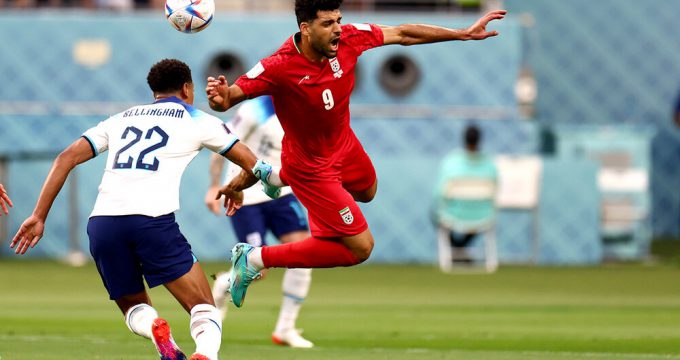 Iran football team had a disappointing start to the 2022 FIFA World Cup, losing to England 6-2 in Group B on Monday.

Iran goalkeeper Beiranvand suffered a head injury after colliding with teammate Majid Hosseini and was forced to leave the field in the 20th minute. Hossein Hosseini came off the bench as Beiranvand’s replacement.

Team Melli showed a poor performance in the first half and conceded three goals within 11 minutes at the Khalifa International Stadium.

Jude Bellingham found the back of the net with a header from the center of the box in the 35th minute.

Harry Maguire nodded down for Bukayo Saka in the 43rd minute and the young attacker sent brilliantly the ball into the top corner.

Three minutes later right-footed Raheem Sterling made it 3-0 from the center of the box. The forward was set up brilliantly by England front-man Harry Kane.

England made it 4-0 in the 62nd minute on a left-footed goal by Saka, his second of the game.

Mehdi Taremi pulled a goal back with a stunning hit in the 64th minute.

Marcus Rashford who just came in as a substitute in the 70th minute fired England’s fifth goal a minute later.

Carlos Queiroz’s side will play Wales on Friday and meet the U.S. four days later.

Qatar 2022 marks Iran’s sixth FIFA World Cup tournaments and their third in succession, the first time they have managed such a run of consecutive appearances.