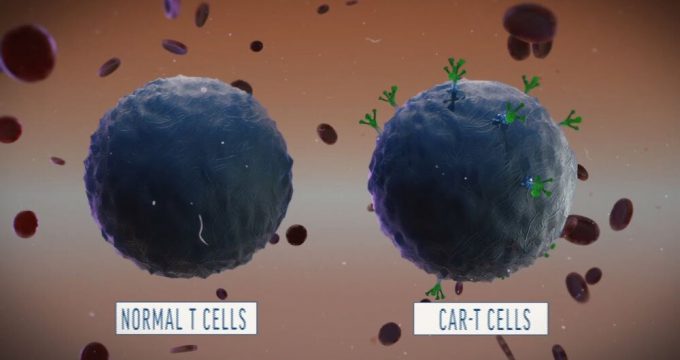 For the first time, a team of Iranian doctors presented a unique method called “CAR T-cell therapy” for the treatment of children with cancer using gene therapy.

Chimeric antigen receptor (CAR) T-cell therapy is a way to get immune cells called T cells (a type of white blood cell) to fight cancer by changing them in the lab so they can find and destroy cancer cells. CAR T-cell therapy is also sometimes talked about as a type of cell-based gene therapy because it involves altering the genes inside T cells to help them attack cancer.

CAR T-cell is the newest method for cancer treatment in the world, which has reached the final stage with the efforts of an Iranian knowledge-based company, Amir Ali Hamidiyeh, head of the gene, cell, and tissue research institute of Tehran University of Medical Sciences said.

The model was localized and used in the country only 4-5 years after its use in the world, he added.

He went on to state that in fact, until 70 years ago, if a child was diagnosed with cancer, death was certain, until chemotherapy drugs came to help and prevented the death of 60-70 percent of patients.

After chemotherapy, stem cell transplantation came with the help of therapists and this method also covered 30-40 percent of children resistant to chemical treatments. Gene therapy raised hope for the recovery of patients increases, especially hose 10 to 15 percent of patients who could not be treated by any of the methods, he highlighted.

This achievement took nearly 7 years to appear successful, he said, adding, after passing cell studies and preclinical studies on animals and obtaining a license and code of ethics from Tehran University of Medical Sciences, a gene therapy product was used for a patient for the first time in the country.

About 135,000 Iranian develop cancer annually, which is facing an upward trend. The most common cancers in the country are prostate cancer in men and breast cancer in women, Afshin Ostovar, head of the non-communicable diseases management office of the Ministry of Health, has said.

On the other hand, cancer risk factors are increasing in the country. The main risk factors for cancer are air pollution, smoking, obesity lack of physical activity, and alcohol consumption.

We have a national cancer management program in the country, which is a comprehensive program in all areas, with 4 main and 7 support processes which cover all ages.

The program covers all areas of care, from prevention to palliative care. If implemented, the National Cancer Program can reduce the incidence of cancer in the country to a great extent and make Iran one of the leading countries in this field.