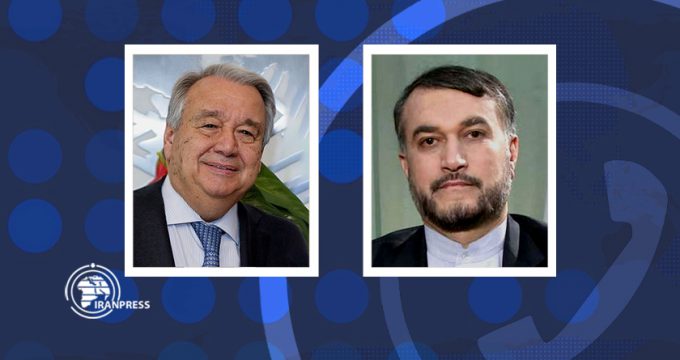 In a telephone conversation with the UN Secretary-General, Iran’s Foreign Minister warned about the negative effects of the political action of the Human Rights Council on Iran’s cooperation with the West.

Iran Foreign Minister Hossein AmirAbdollahian made the remarks in a telephone conversation with the UN Secretary-General Antonio Guterres on Friday.

During the phone call, the two sides exchanged their views on some of regional and international developments including Ukraine, Yemen and talks on the removal of anti-Iran sanctions which used to held in Vienna.

Referring to the path of technical talks between Atomic Energy Organization of Iran (AEOI) and the International Atomic Energy Agency (IAEA), AmirAbdollahian called the cooperation between the two sides ‘proportionate’.

Iran’s top diplomat also briefed the UN chief on the recent exchange of messages between Iran and the United States within the framework of fulfilling the role of the European Union in the Vienna talks.

During the talk, AmirAbdollahian also strongly denied the baseless accusations about sending drones to Russia for use in the Ukrainian war.

Elsewhere in his remarks, he strongly criticized the non-constructive positions and actions of some countries and added that contrary to the United Nations Charter, a few Western governments, by abusing peaceful demands in Iran, encouraged violence and taught how to make weapons and Molotov cocktail in virtual environment and media, which resulted in the killing of police officials and spread of insecurity in Iran to the extent that it laid the ground for the recent ISIL terrorist attack.

In the end, Iran’s Foreign Minister AmirAbdollahian warned about the negative effects of the political action of the Human Rights Council on Iran’s cooperation with the West.

While hailing Iran’s constructive role in the fight against terrorism and helping to establish a ceasefire in Yemen, Guterres called on Iran to continue its cooperation with the UN Special Envoy for Yemen affairs to extend the temporary ceasefire in that country.

Referring to the recent meeting of the ambassadors of Persian Gulf countries and Iran with the UN Secretary-General, Guterres expressed hope that a new structure of regional cooperation can strengthen peace and stability in the region.

Guterres praised Iran’s emphasis on diplomacy and considered the revival of the Iran nuclear deal to be in the interest of all parties.

The UN secretary general further assessed the continuation of Iran’s cooperation with the Agency as a positive step taken by Tehran.