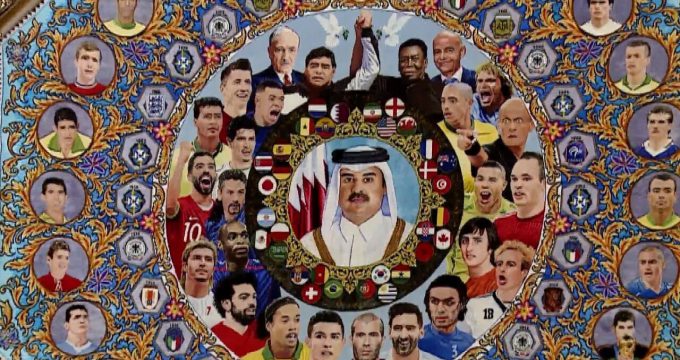 An Iranian artist from Tabriz, East Azarbaijan Province has woven a carpet with about 3.5 million knots and content related to the FIFA World Cup 2022.

The 2022 FIFA World Cup carpet in Qatar has been woven by the efforts of 12 artists, designers, weavers, and dyers of Tabriz, East Azarbaijan Province in Iran.

The weaver of the carpet, Ali Sadeghpour said that the 2022 World Cup carpet is a messenger of world peace and traditional carpet motifs have been used for its texture, which includes the main information of the World Cup in the past and its dyeing has been professional and semi-vegetarian.

Referring to the details of the carpet design, Mohammadnejad, the designer of the carpet, said that images of world cup champion captains and legends of world football in various periods have been used in this artwork.

Earlier, Two Iranian artists from the northwestern city of Tabriz have woven a rug with over 300 colors and content related to the FIFA World Cup 2022.

The rug measures 2*1.6 meters and was woven in two years, said Reza Lamei who has woven the rug with his brother.

He also said that the rug has over 2 million knots, depicting all the flags of participating countries and all the symbols of the tournament, including the logos of countries hosting it since 1930.

The FIFA World Cup will take place in Qatar from 21 November to 18 December 2022.

Iran’s national football team in Group B of the tournament will face England, the US, and Wales.

Team Melli became the 14th team to book their place in the 2022 FIFA World Cup.