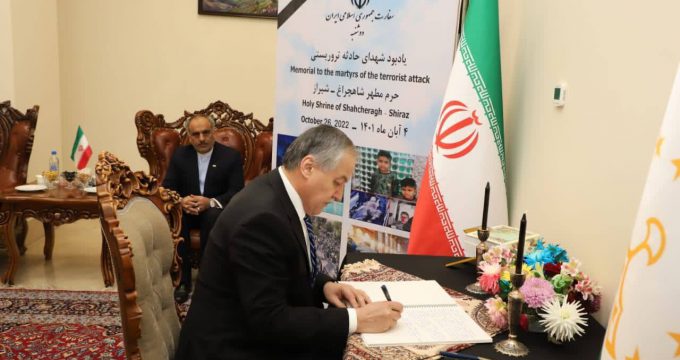 Tajikistan’s Minister of Foreign Affairs Sirojiddin Muhriddin on Thursday visited the Iranian embassy in Dushanbe where he signed the memorial book for the martyrs of the last month terrorist attack in Iran’s southern city of Shiraz.

Muhriddin held talks with Iranian Ambassador Mohammad Taghi Saberi, and expressed his condolences to the people and government of Iran.

The Tajik foreign minister had already extended his condolences in a message to Iranian President Ebrahim Raisi.

At least 13 people were killed when a gunman opened fire at pilgrims at the Shah Cheragh holy shrine in Shiraz on October 26.

Earlier this week, the Iranian Intelligence Ministry said that 26 Takfiri terrorists affiliated to Daesh have been arrested in provinces of Fars, Tehran, Alborz, Qom, and Khorasan Razavi.