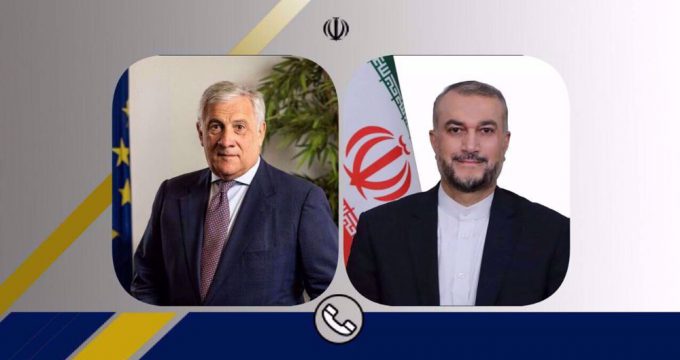 Italy’s Foreign Minister Antonio Tajani has told his Iranian counterpart that the Islamic Republic plays an important role in the regional status quo.

Speaking in a phone conversation with Hossein AmirAbdollahian on Wednesday, Tajani underlined Tehran’s role in the enhancement of peace and stability in the West Asia region.

Tajani went on to say that “Iran and Italy are [both] heirs to ancient civilizations, and can enjoy expansive and growing [bilateral] relations.”

The top Italian diplomat also addressed the issue of the ongoing European Union-mediated talks that are aimed at potential restoration of Iran’s 2015 nuclear deal with world countries.

The United States left the deal, which is officially known as the Joint Comprehensive Plan of Action (JCPOA), in 2018 and re-imposed the sanctions that the accord had lifted.

Tajani vowed that his country would “do its utmost” so the talks would lead to an agreement that meets the interests of all the concerned parties.

The Iranian foreign minister, for his part, explained the latest status of the JCPOA revival negotiations as well as the Islamic Republic’s ongoing cooperation with the International Atomic Energy Agency.

He also expressed hope that the two countries would further expand their political, economic, and cultural relations.

The top Iranian diplomat also thanked Tajani over Italy’s condemnation of the late October terrorist attack on a popular Shia shrine in the southern Iranian Fars Province that led to the death of 15 pilgrims.

Elsewhere in his remarks, the Iranian official turned to the issue of the February-present war between Russia and Ukraine.

Iran’s “principled and unchangeable” policy concerning the conflict rests on “the need for its political resolution and cessation of the war,” he said.

The Islamic Republic would, therefore, continue its efforts towards “advancement of the political process” that could spell an end to the warfare, AmirAbdollahian concluded.