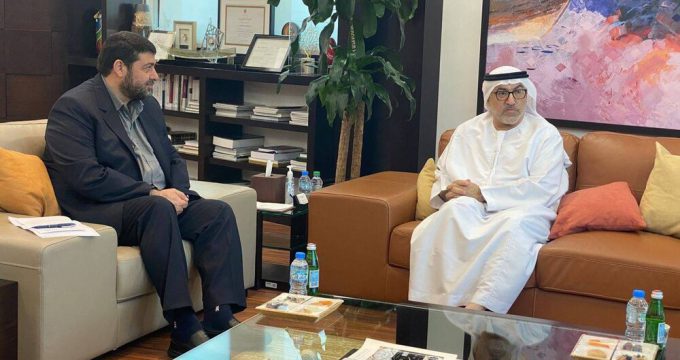 Pirhossein Koulivand, the head of the Iranian Red Crescent Society, in a meeting with Abdul Rahman bin Mohammed Al Owais, the Minister of Health in the United Arab Emirates, discussed the development of bilateral health cooperation.

Iran has achieved great successes in the field of pharmaceuticals and nano-medicine, Koulivand said in the meeting on Tuesday.

The production of anti-cancer medicine is one of the achievements of Iran’s health system, which has been used in an Iranian Hospital in Dubai and has been effective in treating patients, he added.

He went on to note that the IRCS can also be a supplier of medicine at a reasonable price in the UAE due to its capabilities in the field of pharmaceutical production, expressing readiness to cooperate with the UAE Ministry of Health and develop joint relations.

Today, it is not possible to achieve success alone in various matters, and accordingly, synergy should be put on the agenda, he further highlighted.

The import of pharmaceuticals has declined in Iran by 91 percent, which shows the capability of the country’s pharmaceutical industry, Mohammad Reza Shanehsaz, former head of the Food and Drug Administration, said last year.

The Iranian Red Crescent Society is ready to supply medicine at a reasonable price to the United Arab Emirates.Today, all medicine used in the treatment of coronavirus are produced by domestic manufacturers, and if we wanted to import all the items, there would be a high exchange rate, he further stated, emphasizing that COVID-19 vaccine development indicates the pharmaceutical industry’s capability.

A total of 227 knowledge-based firms are supplying medical equipment for health centers across the country, according to the Vice Presidency for Science and Technology.

Some 40 percent of the country’s total pharmaceutical exports are biotechnology products, a member of the board of directors of the Association of Manufacturers and Exporters of Medical Biotechnology Products said.

Iranian-made medicine worth $7.5 million was exported to Russia over the past [Iranian calendar] year (March 2021-March 2022), an official with the Food and Drug Administration has said.

Iran’s biotechnology products are exported to European, Asian, and Latin American countries, and Iran’s technology can compete with other countries in this field, he highlighted.