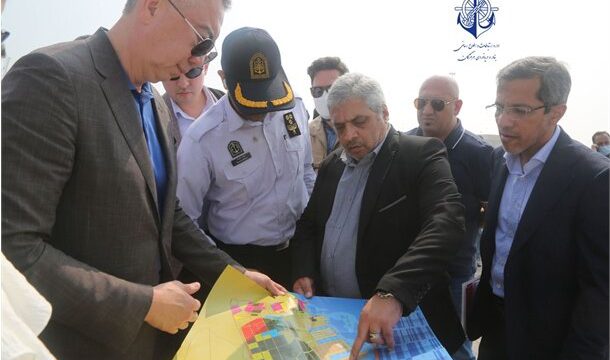 Kazakhstan has reached an agreement with the Islamic Republic of Iran for using the country’s rail network and the southern Shahid Rajaee Port for transiting goods to the Central Asian and Commonwealth of Independent States (CIS) regions.

According to Hossein Abbasnejad, the director general of the Ports and Maritime Department of Hormozgan Province, to this end, the two sides are going to implement a pilot sea-rail transport project which will be launched at the beginning of the next year.

Pointing to a recent visit by Deputy Prime Minister and Minister of Trade and Integration of the Republic of Kazakhstan Zhumangarin Serik to Shahid Rajaee Port, Abbasnejad noted that the two sides have agreed to jointly cooperate in implementing the project.

The official noted that due to the conditions created after the Russia-Ukraine war, one of the important issues concerning the transit of commodities is using the International North-South Transit Corridor (INSTC) which has gained Iran a special position in terms of export and import in the eyes of the Central Asian and CIS countries.

Kazakhstan is among the states that have expressed readiness to transit their goods via Shahid Rajaee Port, he said, adding that Astana and Tehran pursue joint ventures to develop investment in the transit sector.

According to the official, a technical committee of representatives from both countries is going to be formed within the next two months in order to discuss mechanisms and requirements to implement the joint venture, including a plan for transferring container freight goods from northern Iran to Shahid Rajaee Port via railway.

Elsewhere in his remarks, Abbasnejad said that Kazakhstan’s prime minister is scheduled to visit Iran by the year-end and Kazakh authorities are keen on initiating joint economic activities at Shahid Rajaee Port at the same time.

Heading a high-ranking delegation comprised of representatives of governmental entities and private sector companies, Serik visited Shahid Rajaee Port in southern Hormozgan province on November 1 with the aim of inspecting the potential for investment in terminals of the Iranian port.

During his visit to Iran, the Kazakh delegation was also received by Iranian Transport and Urban Development Minister Rostam Qasemi.

After his meeting with Serik, Qasemi said the two sides have agreed to sign a memorandum of understanding (MOU) to develop cooperation in the transportation and transit sectors.

According to the minister, the MOU covers cooperation in a variety of areas including smartening of customs, equalization of tariffs, and facilitation of visa issuance for Iranian drivers and businessmen.

Prior to the mentioned meeting, Serik had said his country was seeking to cooperate with Iran in establishing an export terminal in the Islamic Republic’s southern Bandar Abbas Port.

Stating that his country is looking for the development of export routes for its agricultural products to the Indian subcontinent, the official added: “Our proposal to Iran is not only about building a grain terminal, but also includes related structures and equipment, including wheat and flour warehouses, cold stores and equipment for storing meat.”

This Kazakh official stated that in case of reaching an agreement with Iran, the private sector of his country will pay for the implementation of this project.

In early October, Kazakhstan Prime Minister Alikhan Ashanuly Smaiylov emphasized the importance of improving the level of cooperation between Tehran and Astana in the oil swap, as well as industry, agriculture, scientific and cultural sectors.

The official made the remarks in a meeting with Iran’s First Vice President Mohammad Mokhber on the sidelines of the Second Caspian Economic Forum in Moscow.

Mokhber, for his part, said that the level of trade between Iran and Kazakhstan can quickly reach three billion dollars, considering the existing capacities of the two countries.