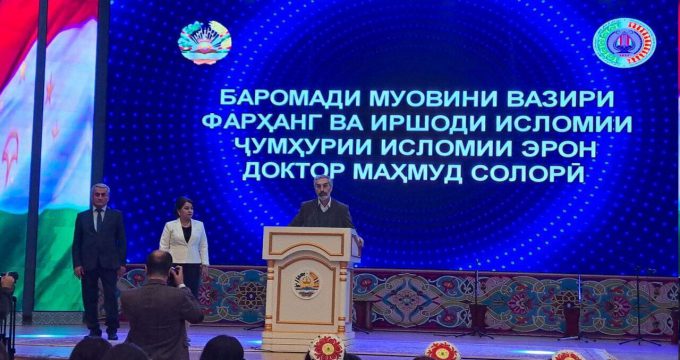 Deputy culture and Islamic guidance minister for artistic affairs said that the Islamic Republic of Iran and the Republic of Tajikistan have established a joint cultural region.”

On Thursday, November 3, Mahmoud Salari in an address in continuation of the Iran Culture Week in Tajikistan at Bokhtar Culture Palace appreciated the hospitable people of Tajikistan, whom he said share the same culture as the Iranians and said that the Iranian nation says hello to their brethren and sisters in Tajikistan.

“The Iranian people consider you their relatives and love you,” he added.

Salari also referred to the recent holding of Tajikistan Culture Week in three Iranian cities, emphasizing, “We are very delighted that Iran and Tajikistan have wisely annulled the plots hatched by alien enemies, and resorting to love and kindness policy established their joint cultural region.”

Then the governor of Bakhtor said that Tajikistan is the home for all Farsi language speaking people in the world, adding, “Today we are very delighted to be the hosts of Iranian art and culture officials and other cultural personalities from Iran.”

Firouzeh Sharifzadeh meanwhile referring to the cultural, historical and…, commonalties of the two countries, said that the two countries’ cultural relations began with poets and poetry, and it still continues on the same path.

She also referred to the holding of the two countries’ culture weeks in each other’s cities, arguing that such events contribute to broadening and deepening bilateral ties and cooperation.