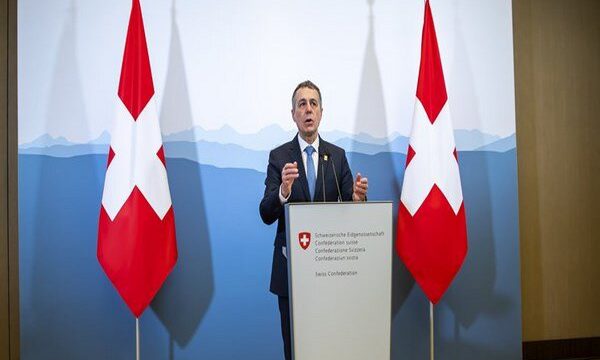 Under the pretext of backing Ukraine and despite ruling out the trumped-up allegations of using Iran’s drones in the Ukraine war, Switzerland has sanctioned Iran.

While anti-Iran measures are being taken by the western states under numerous pretexts, Switzerland has now joined the EU in imposing sanctions against Iran on what it claims to be sending drones to Russia.

On Tuesday evening, Swiss outlets announced that its government has resorted to imposing sanctions against an Iranian firm and three of its individuals in line with Iran’s support of Russia in the Ukrainian war.

“The measures, against the company Shahed Aviation Industries and three senior military officers, are due to come into force later on Tuesday following a decision by the economics ministry, according to a statement by the State Secretariat for Economic Affairs (SECO),” swissinfo reported.

“Shahed Aviation Industries is a company affiliated with the Islamic Revolutionary Guard Corps’ aerospace forces that is responsible for the design and development of the Shahed series of Iranian drones, according to SECO. These have been supplied to Russia and are being used in the war against Ukraine,” it added.

“The people targeted by the sanctions are the chief of staff of the Iranian armed forces, Major General Mohammad Hossein Bagheri, as well as General Sayed Hojatollah Qureishi and Brigadier General Saeed Aghajani,” the source said.

The source went on to note that “they are subject to entry bans. In addition, no more business may be done with them, and any assets they may have in Switzerland will be frozen.”

Referring to the dismissing the unfounded claims by Iranian officials on sending drones to Russia, the source added that “but critics say the sanctions are largely symbolic.”

Switzerland is not a member of the EU but it agreed to take over in principle sanctions by the 27-nation bloc following Russia’s invasion of Ukraine,” it concluded.

Earlier, Iran’s ambassador and permanent representative to the United Nations Amir Saeed Iravani has strongly rejected delivering drones to Russia as totally baseless, saying Tehran has maintained “a position of active neutrality” since the outbreak of the Ukraine conflict.

Also, Iranian foreign minister Hossein AmirAbdollahian has strongly dismissed Iran delivered drones to Russia to use in the Ukraine war, saying Tehran is ready to discuss the issue in a meeting with Ukraine.