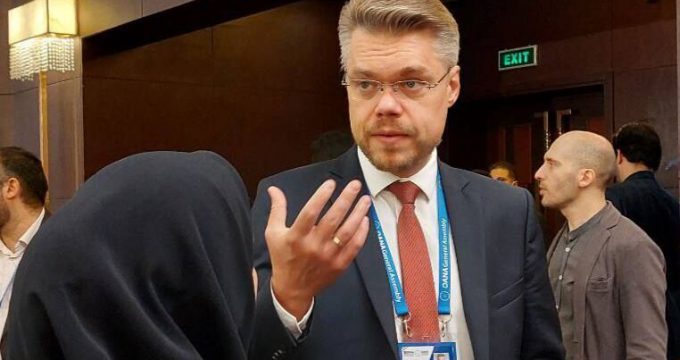 A Russian media director has described the media industry in Iran as dynamic and active, calling for the strengthening of cooperation between Russia and Iran in this regard.

Vasily Pushkov, head of the International Cooperation Directorate of the Rossiya Segodnya media group, told IRNA on the sidelines of the 18th General Assembly of the Organization of Asia-Pacific News Agency (OANA) in Tehran on Tuesday that the Russian media group have had long-term collaborations with their Iranian colleagues and hold meetings virtually or in person.

The Russian director said that he feels the enhancement of media cooperation between Tehran and Moscow as well as among all members of the OANA in the current international situation would be of great significance.

Pointing to the media warfare against Russia along with the Ukraine war, he underlined that the OANA can play a key role in standing against propaganda campaign and help reflect realities on the ground.

Pushkov went on to say that news agencies, which are located in Asia and Pacific regions adopt rational and balanced stance in the face of the war; so, they can help defuse the Western media hype against Russia via disseminating facts and figures.

The OANA was established to facilitate information dissemination among regional countries with the support of the United Nations Educational, Scientific, and Cultural Organization (UNESCO).

The Islamic Republic News Agency (IRNA) hosted the 18th General Assembly of the Organization of Asia-Pacific News Agencies (OANA), which kicked off in the capital Tehran on October 24.

In the two-day assembly, around 60 senior directors, managers, and editors from 35 OANA member states discussed various topics, including the development and strengthening of media cooperation.

IRNA along with Fars and Mehr news agencies are the three media agencies in Iran representing the Islamic country in the OANA.

At the end of the 18th General Assembly of the OANA in Tehran, a declaration was issued by the members on Tuesday.

Members of the OANA in the final communiqué of their meeting in Tehran emphasized the need to use new ways to develop media cooperation plus using new technologies to respond to the needs of the audience.