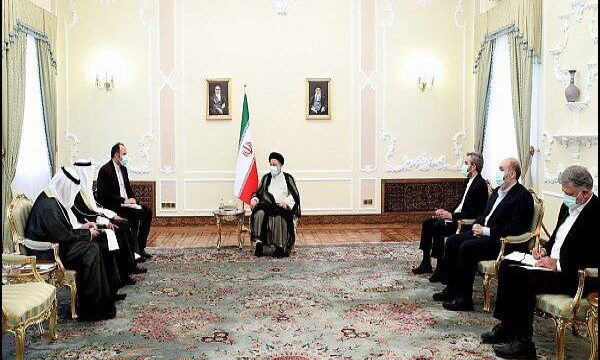 Iran friend of its neighbors in difficult times: Raisi

Iranian President said in a meeting with the Kuwaiti ambassador that the Islamic Republic of Iran has always been a friend of its neighbors in difficult times.

In a ceremony on Wednesday, Badr Abdullah al-Manikh, the new Kuwaiti ambassador to Tehran submitted his credentials to Iranian President Ebrahim Raisi.

The existing capacities in Iran and Kuwait make it possible for the two countries to increase their economic cooperation and trade relations, Raisi said in this meeting.

Iran has always been a friend of its neighbors in difficult times, Raisi added.

He also noted that the dialogue between neighbors and the promotion of cooperation between countries in the region is the most effective solution to the problems.

The intervention of foreigners in regional issues has not solved the problems but has always caused problems, he stressed.

Although building trust in bilateral relations is the starting point of comprehensive regional cooperation, the enemies are trying to hinder the development of regional cooperation with deceptive tricks, the Iranian president said, adding that they will not succeed.

Badr Abdullah al-Manikh is the first Kuwaiti ambassador to Tehran after seven years.

Abdullah al-Manikh submitted a copy of his credentials to Iran’s Foreign Minister Hossein AmirAbdollahian on Saturday.