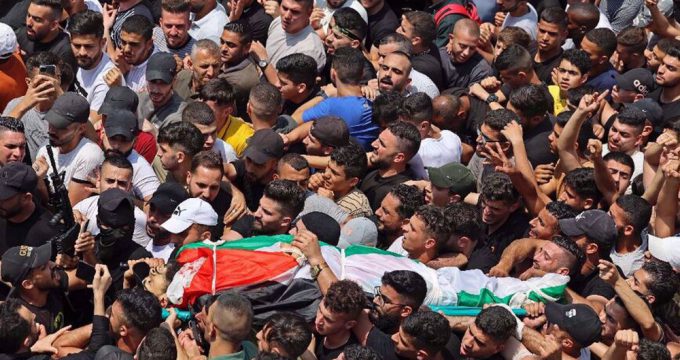 The Iranian Foreign Ministry spokesman has condemned the Israeli aggression against Palestinians in the West Bank city of Nablus, calling for international action to stop the regime’s crimes in the occupied Palestinian territories.

In a statement issued on Tuesday, Nasser Kan’ani criticized the “hypocritical and duplicitous” positions of the United States and some Western countries on human rights issues across the world.

“Their unconditional support for the usurping Zionist regime and its daily crimes against the oppressed Palestinian nation is the biggest example of human rights violations which have been going on for consecutive decades,” he added.

Pointing to the continuation of Israeli crimes and terrorist acts in the occupied West Bank, including the siege and attack on Nablus, Kan’ani called on the international community to take action to condemn and stop the Zionist regime’s genocide in Palestine.

He hailed the courageous resistance of Palestinian people, especially the youths, in al-Quds, Jenin and Nablus, urging international support for the Palestinian struggle against the Zionist regime until the full liberation of Palestine from the Israeli occupation.

The Israeli military has imposed a strict siege on Nablus since October 11, blocking the city’s entrances with military checkpoints and earth mounds, while Israeli drones constantly hover over the northern West Bank city.

The siege came in the wake of a shooting attack carried out by the Palestinian resistance group Lion’s Den near Nablus in which an Israeli soldier was killed.

The siege, which Israeli officials said will continue until further notice, has had economic repercussions on a city that has a particular industrial and commercial importance for the West Bank.

Israeli forces have also recently been conducting overnight raids and killings in the northern occupied West Bank, mainly in the cities of Jenin and Nablus, where new groups of Palestinian resistance fighters have been formed.

At least 175 Palestinians have been killed by Israeli forces in the illegally occupied West Bank and besieged Gaza Strip since the beginning of the year, including 51 Palestinians during Israel’s three-day assault on Gaza in August, according to the Palestinian health ministry.

Local and international rights groups have condemned Israel’s excessive use of force and “shoot-to-kill policy” against Palestinians.