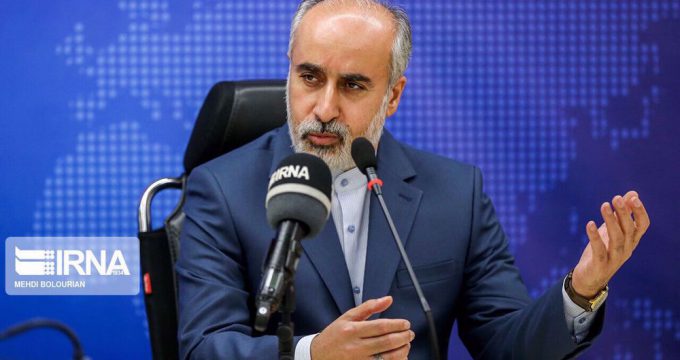 Regarding the recent sanctions imposed by the European Union, the Iranian Foreign Ministry Spokesman said that Tehran will definitely take reciprocal and proportional action in the coming days.

Speaking at his weekly presser on Monday, the Iranian Foreign Ministry Spokesman Nasser Kan’ani answered some questions raised by reporters over the latest regional and international developments.

Regarding Americans’ interference in Iran’s affairs in recent days, Kan’ani said, “Americans’ move of directly supporting the recent riots in Iran is a repetition of the wrong policy that yields no results.”

Americans, in support of the rioters, have claimed that the sanctions removal talks have ended, Kan’ani said, noting, “Americans’ behavior is very hypocritical. They are both hypocrites and liars.”

Regarding the sanctions imposed by the European Union over the alleged sending of drones into the Ukraine war, Kan’ani said, “We will definitely take reciprocal and proportional action in the coming days.”

Western countries’ behavior of supporting chaos and insecurity and instability in countries is an illegal behavior, he also noted.

Regarding the latest developments in JCPOA revival talks, Kan’ani said, “The US says that the negotiations have been stopped but it sends messages to Iran over the resumption of negotiations.”

If the Americans show a political will, the ground will be ready to restore the agreement, he noted.

Regarding the alleged delay in taking a stance on the rejection of the claim raised about Iran’s sending the drone to Russia, Kan’ani stated that the Islamic Republic of Iran has not delayed in this regard in a way that senior and high-ranking authorities of the country have repeatedly expressed their views regarding the ongoing war in Ukraine, and Iran’s positions are clear in that respect.

While lashing out at the policies of Western countries including Europe and the United States in fanning the flames of war in Ukraine, the Iranian diplomat said that the United States and Europe themselves ignited the war in Ukraine with their provocative actions, and now they are accusing Iran of supporting one side of the conflict and war by spreading false information.

Iran has stated many times it will not take sides in the Ukraine war, he said, noting, “We are not an arms exporter to one of the parties in the war. The relationship with the two countries is friendly and our amicable relationship with Ukraine, which has been decreased due to the creation of the atmosphere of other parties, remains in place.”

The parties who accuse Iran of favoring one side of the war in Ukraine is a media warfare waged by Western media outlets, he emphasized.

Kan’ani further advised the Americans not to bet on riots in Iran with the aim of giving up its right at the negotiating table.

As regards the recent IRGC Ground Forces military drill in the norther borders, the spokesman said that Iran’s maneuvres pose no threat to any neighboring country.