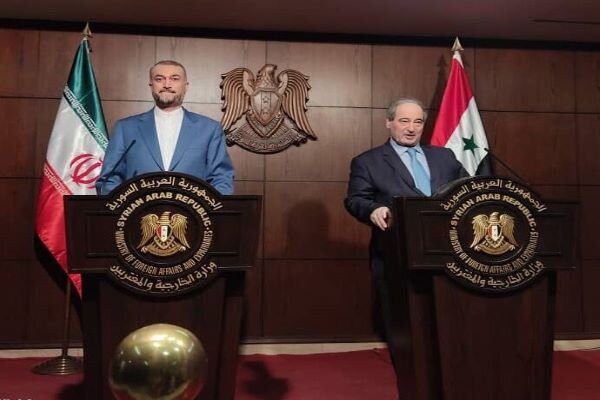 Syrian Foreign Minister Faisal Mekdad has said that the West is seeking to create crisis in independent countries such as Iran.

In a phone call with his Iranian counterpart Hossein Amirabdollahian, Mekdad said on Sunday that the United States and the West in general want to see a destroyed Iran not an independent county.

The Syrian top diplomat noted that the public opinion in the world witnessed what the US and its allies have done in Syria, Afghanistan and Iraq.

According to the Syrian official, the bitter results of foreign intervention in Syria’s internal affairs under the pretext of supporting human rights were provoking crisis against people and government in the Arab country; however, their attempt to hatch plots against Syria doomed to failure.

The two ministers discussed issues of mutual interests, calling for expansion of cooperation at regional and international arenas.

Amirabdollahian said that the Islamic Republic will continue to support Palestine, the resistance movement as well as the Syrian people and government.

The political and propaganda pressures will not create any hesitation among the Iranian government and people to preserve their independence and continue supporting security and stability of the regional countries as well as standing against foreign intervention in particular the occupation policy of the Zionist regime, the Iranian official said.

The Iranian nation will vigilantly nullify plots hatched by the enemies, the minister noted.