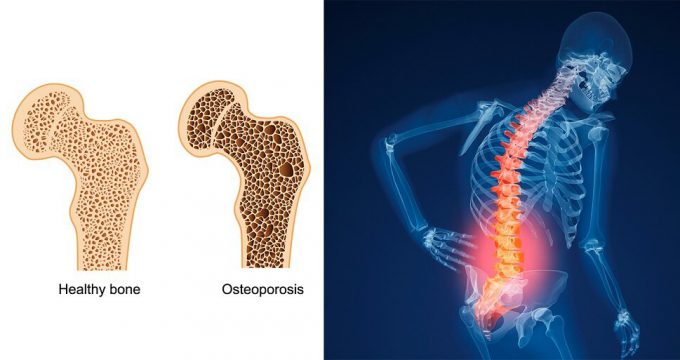 Every year, osteoporosis causes more than 170,000 fractures and about 4,200 deaths among Iranians, which is the most common metabolic bone disease and is known as a hidden epidemic in today’s world.

Osteoporosis causes bones to become weak and brittle, so brittle that a fall or even mild stresses such as bending over or coughing can cause a fracture. Osteoporosis-related fractures most commonly occur in the hip, wrist, or spine. Bone is a living tissue that is constantly being broken down and replaced.

According to the World Health Organization’s report, about 200 million people in the world are suffering from this disease.

Despite the high financial burden of osteoporosis and its fractures, it can be treated with the available drugs and effective treatment of people, but unfortunately, many osteoporosis patients are not aware of their disease.

With age, the phenomenon of osteoporosis can be expected to a large extent; Although this condition is preventable or controllable, it requires following the principles, choosing a healthy lifestyle, taking medicine, and implementing care plans.

According to some doctors, this condition is a silent but the most common metabolic disease of bones. There are no clear signs and symptoms to prove the disease until the appearance of a fracture in the bone or the accidental discovery of this disease during the measurement of bone density.

Parivash Shiri, an expert in the prevention and control of musculoskeletal diseases program of Shahid Beheshti University of Medical Sciences, said that osteoporosis is a common problem of health systems, and is known as a hidden epidemic in today’s world.

The elderly population’s growth on the one hand and urbanization on the other hand cause an upward trend in the prevalence of osteoporosis in many countries around the world, she lamented.

She stated that the economic burden caused by osteoporosis in the country is very high and nearly $400 million per year based on the studies conducted.

Shiri divided the causes of osteoporosis into two categories, modifiable and non-modifiable, and mentioned modifiable factors such as diet, physical activity, not smoking, and alcohol.

In order to prevent osteoporosis, she recommended the sufficient consumption of calcium. Adults aged 50 and above should get 1200 mg of calcium daily.

Regular exercise (for example, 30-40 minutes of walking three to four days a week) is necessary for bone health, she also added.

This disorder is caused by a decrease in the density and strength of the bones, following vitamin D deficiency. Therefore, it is necessary for women who are less exposed to sunlight due to coverings and hijab, to take medicinal supplements.

Osteoporosis is much more common in women than in men, especially after menopause, she noted.

It is very important to perform tests, including blood tests, to monitor the amount of vitamin D in the body due to the possibility of a severe deficiency or even drug poisoning due to excessive consumption of supplements.

In general, in the absence of skeletal problems, the level of vitamin D in the body of women over 40 years old and men over 55 years old should be checked every 6 months by performing a blood test, she suggested.