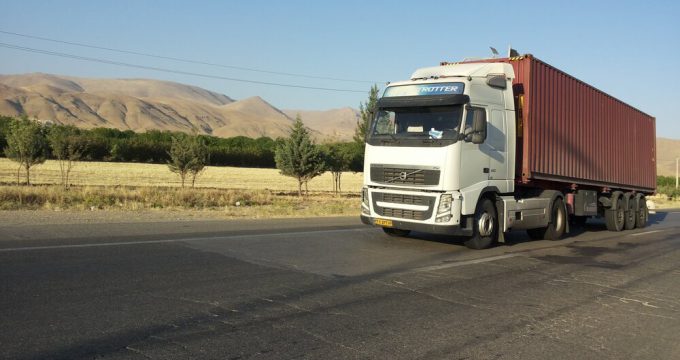 The transit of commodities through the Iranian roads network increased by 38 percent in the first half of the current Iranian calendar year (March 21-September 22), as compared to the first half of the preceding year, the head of Iran Road Maintenance and Transportation Organization announced.

Dariyush Amani said, “We have 26 border terminals with 15 neighboring countries, and with the good potentials we have in the country’s road transport, more than 80 percent of the country’s transport is carried out through roads”.

Transit of commodities through the Iranian roads network increased by 98 percent in the previous Iranian calendar year 1400 (ended on March 20), as compared to the preceding year, the director-general of Transit and International Transportation Affairs Bureau of Iran Road Maintenance and Transportation Organization (RMTO) said.

According to Javad Hedayati, over 9.3 million tons of goods were transited via the country in the previous year.

Meanwhile, as previously announced by the head of the Islamic Republic of Iran Customs Administration (IRICA), transit of commodities through Iran increased 22 percent in the first half of the current Iranian calendar year, as compared to the same period of time in the past year.

Alireza Moghadasi said that 7.028 million tons of commodities have been transited via the country in the six-month period.

After seven years of reduction in the transit of goods from the country, the growth path of transit resumed in the past Iranian calendar year 1400 (ended on March 20) and with the passage of 12.65 million tons of goods through Iran, a growth of 68 percent was achieved, the spokesman of IRICA has previously noted.

The 68-percent growth in transit last year and the 39-percent rise in the first two months of this year promise to reach 15 million tons of goods passing through Iran in the current year, which has been unprecedented in the entire history of the country, Ruhollah Latifi added.

The policy of paying attention to neighbors and developing political and economic relations with neighboring countries in the current government, increasing attention to road and rail routes in the world and the efforts and cooperation of transportation and trade-related organizations in establishing or activating corridors through the country has led to significant growth in transit of goods through Iran.

Iran is one of the countries that has a special status in trade and transit relations due to its strategic location and special geography, as the country is the passage of several important international corridors.

Considering its geographical location, Iran can play a significant role in the transit of goods in the region and benefit a lot from its status in this due.

Paying attention to upstream documents, especially the country’s development plans, and the government’s decision to develop transit, paying special attention to infrastructure development, reducing transit time, making it cheaper to cross Iran and making more advantages over competitors, due to the short path for customers, can lead to facilitating the development of transit so that the country can reach the desired growth in this due.