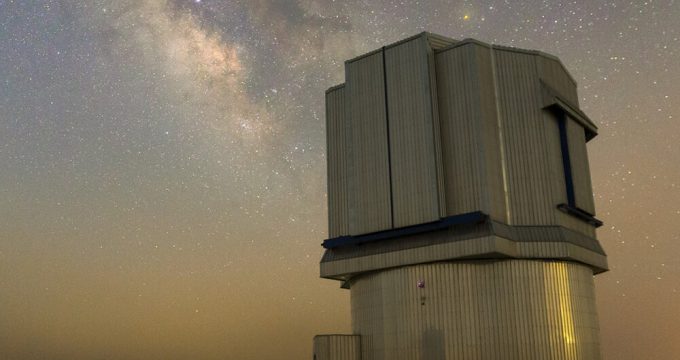 In a major milestone for Iran’s scientific community, astronomers in Tehran announced on Wednesday that the Iranian National Observatory (INO) has seen “first light”.

The world-class, 3.4-meter optical telescope is operational and has acquired its debut images.

“We’ve been waiting for this moment for so long,” said INO Project Director Habib Khosroshahi, an astronomer at the Institute for Research in Fundamental Sciences (IPM) in Tehran, told Science.

INO project was initiated about 20 years ago, aiming at the development of a medium-class telescope to provide a research facility for national users. Thanks to its geographic location, it is expected to attract international users and visiting instruments. The site selection campaign was concluded by selecting Mt. Gargash at 3600m above sea level in central Iran, 100 km north of the city of Isfahan.

“With this amazing image quality, right at the start of the commissioning, we demonstrated that the optics, mechanics, and the control hardware and the software, an integral of tens of thousands of parts, work in tandem and will allow our astronomers to explore the universe within reach of this modern facility”, Khosroshahi added, according to INO website.

He added that this is a special moment because most of the sub-systems have been developed in-house, either at INO or by the local industry supervised by INO.

“INO is at its best right at the start of a new journey towards scientific operation”, he asserted.

The Iranian observatory could help fill a geographic gap in a global network that keys in on fleeting phenomena such as gamma-ray bursts.
Gerry Gilmore, an astronomer at the University of Cambridge and chair of INO’s international advisory board, said “When they started this project, it was just a dream. No one in Iran had attempted anything on this scale before.”

Last year, some former INO personnel voiced concerns about whether changes to INO’s design might compromise its performance. “Those doubts have been put to rest,” said optical engineer Lorenzo Zago, a consultant and advisory board member.

INO opened its dome for sky calibration on 27 September and the next night imaged Arp 282, a pair of galaxies some 319 million light-years from Earth.

The image’s resolution—0.8 arc seconds—and that of a second image taken a few days ago, 0.65 arc seconds, are close to the limit set by the atmospheric conditions at INO’s site, 3600-meter Mount Gargash in central Iran. “That resolution’s spectacular. Much better than expected,” Gilmore said.

“The science run, which hopefully starts next summer, will show the quality of the design and construction,” said Reza Mansouri, a theoretical astrophysicist at the Sharif University of Technology who led the project until 2016 and who last year expressed worries about the telescope’s future.

The Iranian observatory and two others in the region—a 4-meter infrared telescope in Turkey nearing completion and a 3.6-meter optical telescope in India—fill a geographic gap in a global network that keys in on fleeting phenomena such as gamma-ray bursts to try to pinpoint their locations and unravel their physics. “You need a chain of telescopes all around the world to follow up,” Gilmore said.

In building INO, astronomers in Iran had to surmount hurdles that few colleagues elsewhere face: sanctions that curtail high-tech imports, and visa restrictions limiting their travel abroad. The Iranian team purchased the glass mirror blanks from a German firm. INO engineers then had to figure out how to construct nearly everything else on their own. “What surprises me is that the know-how came so fast,” Zago said. “They’ve been working like hell!”

“At every stage, they increased the project’s ambition and complexity,” Gilmore said. For example, he said, when so-called active control systems—sensors, actuators, and software that position a primary mirror—first became available for larger telescopes about a decade ago, INO engineers incorporated those into the design.

What’s “truly astonishing,” Zago said, is a precision vacuum chamber that INO engineers and an Iranian company fashioned to coat the blanks with aluminum, transforming the polished glass into telescope mirrors.

When the United Kingdom in the 2000s set out to build an aluminizing system for its Visible and Infrared Survey Telescope for Astronomy, Gilmore said, “it took us forever to get right.”

Khosroshahi hopes to forge partnerships with international teams that might install state-of-the-art instrumentation in INO’s four instrument slots. “The door is open from our side,” he said, though sanctions and politics could stymie some potential collaborations.

In the meantime, Iran’s burgeoning astronomy community—just a couple of dozen strong at the project’s outset but several hundred scientists and students today, Khosroshahi said—is looking forward to some serious stargazing.

“We fought with disappointment, darkness, and also with words that could discourage us,” said IPM’s Maryam Torki. “But in the end, we witnessed this glorious birth.”