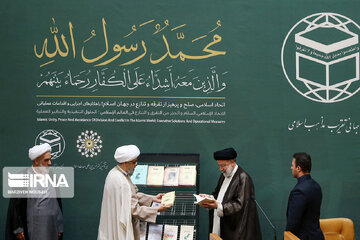 Seyyed Ebrahim Raisi said: “The West and the system of domination have realized that Islam is the only obstacle against their domination.”

The 36th international conference on Islamic unity kicked off in Tehran on Wednesday morning.

He added: “They tried to prevent Islam, which is centered in Iran, from creating a wave of awakening in the world, and for this, they took several actions:

2. Media empire to disturb the minds of Muslims

3. Formation of takfiri groups and killing of Muslims, and,

4. Insulting the Prophet of Islam and blaspheming.

Delivering a speech at the event, Ebrahim Raisi said that the Islamic world could resist the Israeli regime by relying on their potential.

Raisi slammed some regional states for their normalization ties with the Israeli regime and noted that the regional nations never accept such normalization, distinguishing the nations from the states.

He referred to Imam Khomeini’s call for the Islamic ummah’s unity, stressing that Imam Khomeini hoisted the flag of unity between Muslims across the world from any color and region and with any language and attitude.

The Iranian president called on the Islamic scholars on Islam and Muslims’ high place on one hand and the enemy and their weakness on the other.

“The inclusiveness of the religion gives strength and power to human so that they can stand against the cultural invasions and the versions presented from the West and the East that have no harmony with a religious life,” he said.

Raisi stated that Muslims across the world wanted to base their lives on Islamic teachings and principles, an issue that the enemies were afraid of.

He then pointed to the enemies’ attempts to fight against Islam as their major challenges in the world, such as the US creation of Takfiri terrorist groups, including ISIS, and support for them: