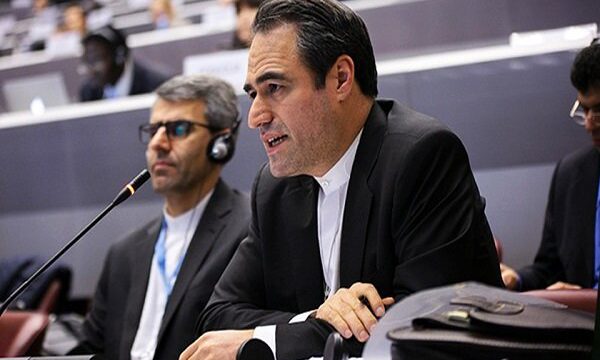 Stating that Israel has prevented nuclear disarmament in the region Iranian diplomat urged the international community to put pressure on the regime to join the NPT as a non-nuclear-weapon party.

Iran’s Representative to the UN General Assembly First Committee Heidar Ali Balouji made the remarks while addressing the 77th session of the committee’s meeting on disarmament and international security held in New York on Monday.

Outlining Iran’s principled stance on disarmament and international security, he said new and unconventional security threats have undermined the peace and deteriorated the security situation in the world.

He warned that increased tensions along with the nuclear arms race could lead to a cold, and even nuclear war in the world, Press TV reported.

Balouji drew attention to the spike in military expenditures and the all-time high in military transfers in 2021, saying the United States has the highest military spending and nuclear arms in comparison with other countries.

He said the implementation of the binding legal obligations of nuclear powers in accordance with Article VI of the Nuclear Non-Proliferation Treaty (NPT) has not been realized due to the failure of international nuclear arms control treaties and the unfortunate lack of success of two consecutive NPT review conferences.

Nuclear powers are increasing their stockpile of arsenals, he warned.

Besides erosion of the arms control architecture, there was non-compliance with the NPT by nuclear-weapon states, the Iranian envoy said, emphasizing that the international community must hold them accountable.

Balouji added that the Israeli regime is equipped with weapons of mass destruction, has carried out cyber and physical attacks against nuclear facilities, and has also assassinated scientists.

He noted that Israel has prevented nuclear disarmament in the region, urging the international community to put pressure on the regime to join the NPT as a non-nuclear-weapon party and subject its activities to the International Atomic Energy Agency (IAEA) safeguards.

“We believe that nuclear weapons are not deterrents, but tools of mass murder,” he said.

The Iranian diplomat further explained that nuclear disarmament through total elimination could be a simple solution, adding that the use of chemical or biological weapons should be rejected and all the conventions in this regard must be implemented.

The United States has blocked the Biological Weapons Convention’s strengthening and total elimination of chemical weapons and had reservations about the 1925 Geneva Protocol, he said.

Cyberspace and outer space could only be utilized for peaceful purposes, he said, expressing Iran’s opposition to reckless decision-making or unilateral interpretations in reference to two regrettable examples of irresponsible behavior by the US and the Israeli regime.