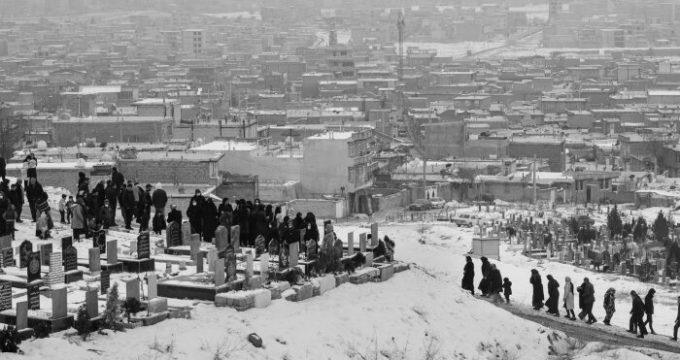 This black and white photo shows people attending a funeral on a snowy day in a cemetery in the northwestern Iranian city of Urmia.

Behjat received the honor in the People category of the exhibition, which is organized every year with contributions from the Federation Internationale de l’Art Photographique (FIAP), the Photographic Society of America (PSA) and the Focus Photo Club, Iran’s branch of the FIAP.

Omidreza Purnabi, another Iranian photographer, received an honorable mention for his photo “After Fishing”.

Water is the central theme of the exhibition, which is held in the categories of Open Monochrome, Open Color, Water Color, Travel, Landscape Color and People.

Several Iranian photographers were also honored in other sections.

Abbas Hajihossein-Kalantar was awarded the FPC Trophy in the Open Monochrome section for his photo “Line”. It shows a man standing under Tehran’s Azadi Tower. His photo “Macro Water” also won the FIAP Ribbon in the Water Color category.

The FIAP Gold Medal of the Open Monochrome section went to Diana Chan from Hong Kong for “Motorcycle Race”. Chan also won the FIAP Light Blue Badge, which is the grand prize of the exhibition.

The FIAP Ribbon in the Travel section was also given to Iranian photographer Seyyed Reza Javadi for “Man and Fire” depicting a man climbing up a ladder to a brick kiln roof.

Saeid Sabetqadam-Moqaddam was honored with the FPC Trophy in the Landscape Color section for “Khaled Nabi”, which shows a view of the tomb of a prophet, Khaled Nabi.

The winners were selected by a jury comprising Djordje Vukicevic from Serbia, Reha Bilir from Turkey, and Ahmad Khatiri from Iran.