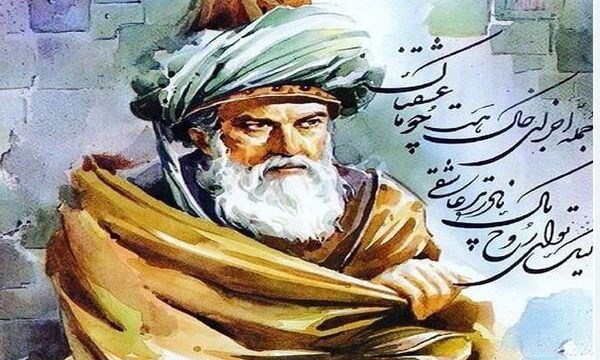 Mehr 8 in the Iranian calendar corresponding with September 30 is considered a significant cultural event for Iranians to commemorate the prominent Iranian poet Jalal ad-Din Muhammad Rumi who is known to everyone.

The land of Iran is the cradle of countless famous people and poets; one of the most famous Iranian poets is Jalāl ad-Dīn Muhammad Balkhī, who is known as Mawlānā, Mawlawī, and more popularly simply as Rumi.

He is widely known by the sobriquet Mawlānā/Molānā in Iran and popularly known as Mevlânâ in Turkiye. Mawlānā is a term of Arabic origin, meaning “our master”, and is also frequently used for him.

Rumi was born to native Persian-speaking parents on the Eastern shores of the then Persian Empire on September 30, 1207, in the city of Balkh which is now part of Afghanistan, and finally settled in the town of Konya, in what is now Turkey.

Rumi’s life story is full of intrigue and high drama mixed with intense creative outbursts. Rumi was a charming, wealthy nobleman, a genius theologian, a law professor and a brilliant but sober scholar, who in his late thirties met a wandering and holy man by the name of Shams on November 30, 1244, in the streets of Konya.

For months the two mystics lived closely together, and Rumi neglected his disciples and family so that his scandalized entourage forced Shams to leave the town in February 1246. Rumi was heartbroken, and his eldest son, Sulṭan Walad, eventually brought Shams back from Syria. The family, however, could not tolerate the close relation of Rumi with Shams, and one night in 1247 Shams disappeared forever. In the 20th century, it was established that Shams was indeed murdered, not without the knowledge of Rumi’s sons, who hurriedly buried him close to a well that is still extant in Konya.

After Shams was extinguished, Rumi fell into a deep state of grief and gradually out of that pain outpoured nearly 70,000 verses of poetry almost all in Persian that are collected in two epic books. These thousands of poems, which include about 2,000 in quatrains, are collected in two epic books. The first collection is devoted to his mentor Shams named, Divan-e Shams-e Tabrizi. It took him 15 years to complete this collection.

After the first collection, he devotes the last ten years of his life to creating Masnavi Ma’navi. A work filled with anecdotes, life lessons, moral stories, stories from all three Abrahamic religions, and popular topics of the day.

Rumi and Shams stayed together for a short time, about 2 years in total, but the impact of their meeting left an everlasting impression on Rumi and his work. In Rumi’s own words, after meeting Shams he was transformed from a bookish, sober scholar to an impassioned seeker of universal truth and love. Rumi was totally his own man. He was an utterly brilliant artist and a true genius who after the death of his mentor Shams became unstoppable.

Due to the fact that Rumi recited poetry for about 25 years and 70,000 verses, he has covered every morsel of emotion, thought, idea and topic. Therefore, he can’t be pinned on one statement. His work has an all-embracing universality. A call from an independent soul yearning for true freedom from dogma and hypocrisy.

Rumi also had three prose works. The prose works are divided into The Discourses, The Letters, and the Seven Sermons.

Fihi Ma Fihi provides a record of seventy-one talks and lectures given by Rumi on various occasions to his disciples. It was compiled from the notes of his various disciples, so Rumi did not author the work directly.

Majāles-e Sab’a contains seven Persian sermons (as the name implies) or lectures given in seven different assemblies. The sermons themselves give a commentary on the deeper meaning of the Qur’an and Hadith. The sermons also include quotations from poems of Sana’i, ‘Attar, and other poets, including Rumi himself.

Makatib is a collection of letters written in Persian by Rumi to his disciples, family members, and men of state and influence. The letters testify that Rumi kept very busy helping family members and administering a community of disciples that had grown up around them.

Rumi believed passionately in the use of music, poetry and dance as a path to reaching God. For Rumi, music helped devotees to focus their whole being on the divine and to do this so intensely that the soul was both destroyed and resurrected. Rumi encouraged Sama, listening to music and turning or doing the sacred dance. In the Mevlevi tradition, Sama represents a mystical journey of spiritual ascent through mind and love to the Perfect One. In this journey, the seeker symbolically turns towards the truth, grows through love, abandons the ego, finds the truth and arrives at the Perfect. The seeker then returns from this spiritual journey, with greater maturity, to love and to be of service to the whole of creation without discrimination with regard to beliefs, races, classes and nations.

He died on 17 December 1273 in Konya. His death was mourned by the diverse community of Konya. Rumi’s body was interred beside that of his father, and a splendid shrine, the Green Tomb was erected over his place of burial. Upon his death, his followers and his son Sultan Walad founded the Mevlevi Order, also known as the Order of the Whirling Dervishes, famous for the Sufi dance known as the Sama ceremony.

Georgian Queen Gürcü Hatun was a close friend of Rumi. She was the one who sponsored the construction of his tomb in Konya. The 13th century Mevlâna Mausoleum, with its mosque, schools and living quarters for dervishes, remains a destination of pilgrimage to this day.

Rumi is also timeless and placeless. The world has embraced Rumi not because of where he was born or where he grew up or what religion he belonged to but because of what he represents.

By the end of the 20th century, his popularity had become a global phenomenon, with his poetry achieving wide circulation in Western Europe and the United States.

December 17 is the day of Rumi’s death. In Konya, a special commemoration ceremony for Rumi is held every year from December 7th to 17th.

In a ceremony known as Sama, dancers wear long white robes with full skirts. On the dancers’ heads sit tall conical felt hats. The dancers, who fast for many hours before the ceremony, start to turn in rhythmic patterns, using the left foot to propel their bodies around the right foot with their eyes open, but unfocused. This is sought through abandoning one’s nafs, ego, or personal desires, by listening to music, focusing on God, and spinning one’s body in repetitive circles, which has been seen as a symbolic imitation of planets in the Solar System orbiting the sun.

In Iran, the 7th day of Mehr and the 8th day of Mehr – the eighth month on the Iranian calendar, which fell on September 28 and 29 this year – have been designated as the National Day of Shams Tabrizi and National Day of Rumi respectively to commemorate these two great poets and figures of Iran and the world.

Here are some lines from his poem ‘Listen to the reed’, translated by Reynold A. Nicholson, 1926:

“Listen to the reed how it tells a tale,
complaining of separations.
Saying, “Ever since I was parted from the reed-bed,
my lament hath caused man and woman to moan.
I want a bosom torn by severance,
that I may unfold (to such a one) the pain of love-desire.
Everyone who is left far from his source
wishes back to the time when he was united with it.
In every company, I uttered my wailful notes,
I consorted with the unhappy and with them that rejoice.
Everyone became my friend from his own opinion;
none sought out my secrets from within me.
My secret is not far from my plaint,
but ear and eye lack the light (whereby it should be apprehended).
The body is not veiled from soul, nor soul from the body,
yet none is permitted to see the soul.
This noise of the reed is fire, it is not wind:
whoso hath not this fire, may he be nought!
‘Tis the fire of Love that is in the reed,
’tis the fervour of Love that is in the wine.”