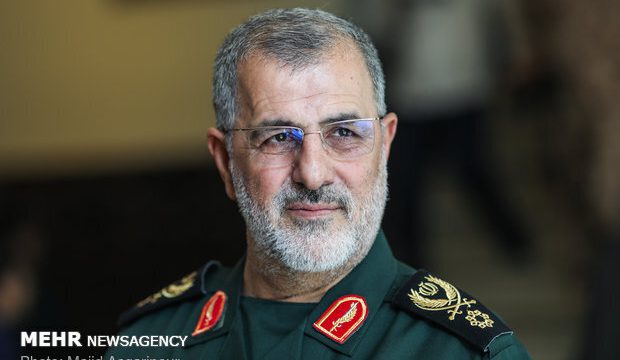 The Commander of the Islamic Revolutionary Guards Corps (IRGC) Ground Forces said that the positions of the terrorist outfits in northern Iraqi Kurdistan region were hit by 73 ballistic missiles.

Brigadier General Mohammad Pakpour pointed to today’s operations launched by Hamzeh Seyed al-Shohada Base and added that in this anti- terrorist operations, which were launched in depth of northern Iraqi region of Kurdistan, a number of 73 surface-to-surface ballistic missiles and dozens of destruction drones have precisely struck the terrorist positions and targets which led to their complete destruction.

He called on the authorities in the northern Iraqi region of Kurdistan to remove the anti-Iran terrorist outfits settled there and stressed that the operations would continue until the full disarmament of the outfits in the very region.

General Pakpour said that in the new phase of the operations, these targets, which were scattered at 42 points and, in some cases, were 400 kilometers away from each other and definitely belonged to anti-Iranian terrorist groups, were hit.

Earlier on Monday, the IRGC’s Ground Force launched artillery and drone attacks against terrorist bases and pounded the gatherings, training camps, and operations rooms of terrorist groups in the Iraqi Kurdistan region with smart and precision-strike weapons.

According to the statement, the details of the operation and the casualties and damage caused to the terrorist groups will be released soon.

Moreover, in a statement on Saturday, the IRGC said units belonging to the Hamzeh Seyed al-Shohada base launched the operation to “destroy the positions of anti-Iran terrorist groups affiliated with global arrogance in northern Iraq who have in recent days trespassed on Iran’s northwestern borders and attacked some border bases of our country.”

The statement added that the operation would continue in order to “ensure sustainable border security and punish criminal terrorists” and hold officials in northern Iraq accountable towards fulfilling their legal duties in accordance with international regulations.