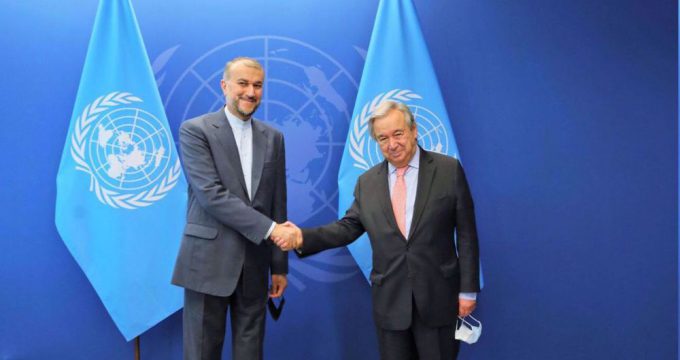 Secretary-General of the United Nations Antonio Guterres has hailed Iran’s significant contribution to the establishment of peace and security in the Middle East region, voicing support for a revival of the 2015 multilateral deal with Iran.

Guterres held a meeting with Iranian Foreign Minister Hossein AmirAbdollahian on Tuesday in New York on the sidelines of the 77th UN General Assembly (UNGA) session.

The UN chief thanked Iran for greatly contributing to peace and security in the troubled Middle East region, according to the Iranian Foreign Ministry.

The UN chief said, “We have always supported the return of all parties to the Iran nuclear agreement, and hope to see its realization soon.”

AmirAbdollahian, for his part, stated that a lot of progress has been achieved in the course of negotiations on the removal of anti-Iranian sanctions.

“We believe that an agreement can be within reach if the American side shows realism,” the top Iranian diplomat underscored.

The United States, under former president Donald Trump, abandoned the Iran nuclear deal, officially known as the Joint Comprehensive Plan of Action (JCPOA), in May 2018 and reinstated unilateral sanctions that the agreement had lifted.

The talks to salvage the agreement kicked off in the Austrian capital city of Vienna in April last year, months after Biden succeeded Trump, with the intention of examining Washington’s seriousness in rejoining the deal and removing anti-Iran sanctions.

Elsewhere in his remarks, AmirAbdollahian commented on recent desecration of Islamic sanctities and acts of vandalism by rioters, who exploited a series of protests in several Iranian cities over the death of a young woman.

Protests out in several Iranian cities over the September 16 death of Mahsa Amini, a young Iranian woman who died at hospital a few days after collapsing at a police station in the capital Tehran, where she and a group of others were receiving educational training on dress code rules.

Quickly afterwards, however, the protests were hijacked by rioters, who engaged in deadly violence, acts of vandalism, and desecration of Islamic sanctities.

Also on Tuesday, the Iranian foreign minister met with Csaba Kőrösi, president of the 77th session of the UN General Assembly.

AmirAbdollahian stated that Iran attaches great importance to the international event, and hopes that the current session will be an opportunity to exchange views in order to address global challenges in the fields of international peace and security.

He also briefed Kőrösi on the latest situation of JCPOA revival talks and the messages exchanged with the American side.

“Terrorism and extremism are still the main challenges in the Middle East region, and have turned into a source of serious concern for regional countries in the wake of deterioration of the situation in Afghanistan,” the Iranian foreign minister also said.

Amir-Abdollahian also pointed to the Resolution on Combating Sand and Dust Storms (A/C.2/72/L.49), proposed by the Islamic Republic of Iran and approved by the UNGA, describing sand and dust storms as a common problem of Middle Eastern states which threatens the health of millions of people.

For his part, Kőrösi expressed hope that Iran would play an active role in building consensus among UNGA member states, and introduction of draft resolutions.

He noted that the UN Security Council has failed to deal with many global issues, stating that the international community expects the General Assembly to be more active in dealing with issues related to global security.

Kőrösi expressed hope that Iran would actively participate in the next International Conference on Water Resources Management, scheduled for March next year.