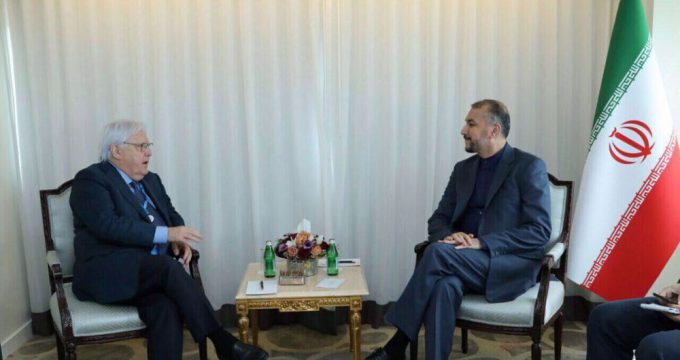 Iranian Foreign Minister Hossein AmirAbdollahian has called upon the United Nations to work toward lifting the crippling Saudi blockade on Yemen and facilitating genuine political dialogue between warring parties for the temporary truce to stay in effect.

AmirAbdollahian made the remarks in a meeting with Martin Griffiths, Under-Secretary-General for Humanitarian Affairs and Emergency Relief Coordinator at the United Nations, in New York on the sidelines of the 77th UN General Assembly session.

“The UN is expected to direct due attention at the lifting of the inhumane blockade against the Yemeni nation and also work towards real political negotiations between representatives of all Yemeni parties in order for the current ceasefire to uphold,” he said.

He also extended gratitude to the senior UN official for his efforts in facilitating Tehran’s support for the continuation of international humanitarian efforts aimed at alleviating human suffering.

The two sides also exchanged views on the latest political developments and the humanitarian situation in Afghanistan and Syria.

“While nearly five million Afghan immigrants are currently living in Iran, and a significant number of Afghans cross the borders into Iran on a daily basis, the United Nations has so far failed to provide any humanitarian assistance to the large population, especially the newly arrived refugees,” AmirAbdollahian said.

The Iranian foreign minister also underlined the need for fair distribution of humanitarian aid among all Syrians as well as the attention of international humanitarian organizations to the Syrian people.

While people in the war-ravaged Arab country are suffering from the lack of safe drinking water and electricity, terrorists and Takfiri militants stationed in the northwestern province of Idlib have a much different situation, he said.

Elsewhere in his remarks, AmirAbdollahian elaborated on Iran’s efforts to stop the Russia-Ukraine war and said close attention must be paid to the situation of Ukrainian refugees.

Griffiths, for his part, thanked Iran for its hospitality toward Afghan refugees and described Iran as a unique example in the world for taking in and helping refugees.

He also called political dialogue the key to maintaining the ceasefire in Yemen and establishing economic stability in the conflict-stricken country and thanked Iran for its unbiased attention to the crisis in Ukraine.

Spokesman for the Yemeni armed forces, Brigadier General Yahya Saree, has warned foreign companies against their continued plundering of the country’s natural resources.

“We demand foreign firms looting Yemen’s natural wealth to pay serious attention to the warning made by the leader of the popular Ansarullah resistance movement, Abdul-Malik al-Houthi,” Saree wrote in a post published on his Twitter page.

Earlier, Houthi had stressed that the foreign companies involved in the looting of Yemen’s natural reserves are accomplices to the Saudi-led coalition’s aggression against the country.

Mahdi al-Mashat, who heads Yemen’s Supreme Political Council, also stated that the people of Yemen will not remain silent about the looting of their natural wealth, whose proceeds Saudi mercenaries use to set up companies and buy real estate abroad.

Saudi Arabia launched the devastating war on Yemen in March 2015 in collaboration with its Arab allies and with arms and logistics support from the US and other Western states.

The objective was to reinstall the Riyadh-friendly regime of Abd Rabbuh Mansur Hadi and crush the popular Ansarullah resistance movement, which has been running state affairs in the absence of a functional government in Yemen.

While the Saudi-led coalition has failed to meet any of its objectives, the war has killed hundreds of thousands of Yemenis and spawned the world’s worst humanitarian crisis.