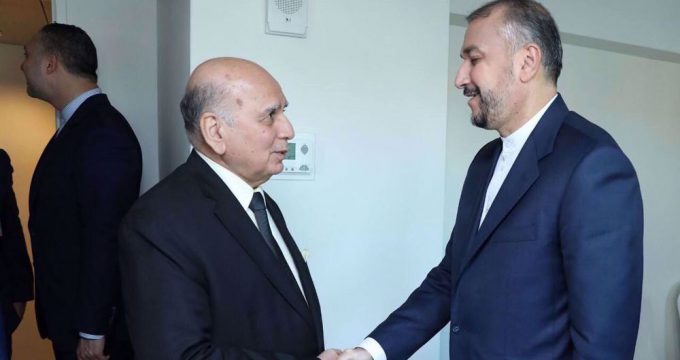 Iranian Foreign Minister Hossein AmirAbdollahian has strongly censured the United States for its attempts to interfere in the country’s domestic affairs and instigate riots and instability in Iran in the aftermath of the death of a young Iranian woman after she was taken into a police station.

AmirAbdollahian said in a Sunday meeting with his Iraqi counterpart, Fuad Hussein, that the United States is taking advantage of the pure sentiments of the Iranian nation to destabilize the country, get people killed by its own mercenaries, and then blame the Iranian government.

The two top diplomats met on the sidelines of the 77th annual session of the United Nations General Assembly in New York, where they discussed, among other things, the latest wave of protests in Iran.

AmirAbdollahian pointed out that peaceful protests are among the basic rights of every nation, but cautioned that some American officials are making meddlesome remarks regarding the protests.

He added that Washington’s approach toward the riots is at odds with frequent messages by the White House stressing the need to reach an agreement with Tehran as a prelude to stability and security across the region.

Protests have broken out in several Iranian cities over the September 16 death of Mahsa Amini, a young Iranian woman who died at a hospital a few days after collapsing at a police station in the capital Tehran, where she and a group of others were receiving educational training on dress code rules.

Despite Iranian officials’ clarification on the circumstances surrounding Amini’s death, violent street protests have led to attacks on security officers and acts of vandalism against public property and sanctities.

The top Iraqi diplomat, for his part, pointed to what he called positive negotiations between Iran and Saudi Arabia in his country, expressing Baghdad’s readiness to host a new round.

Hussein said Baghdad would continue its efforts in this regard and invites both Tehran and Riyadh to restore relations and reopen embassies.

Ties between Tehran and Baghdad have been founded on common historical, cultural and religious bonds, he said.

The Iraqi foreign minister added that his country is keen to improve its relations with Iran.

Iraq has hosted five rounds of talks between Saudi Arabia and Iran at the level of intelligence and security heads since April last year.

In a meeting with the Iraqi foreign minister in August, Iran’s President Ebrahim Raisi said a re-establishment and further bolstering of relations between Iran and Saudi Arabia would benefit regional security.

During their Sunday meeting, the Iranian and Iraqi foreign ministers also exchanged views about the latest regional events, including the developments in Yemen and Ukraine.