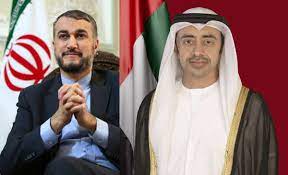 Amir Abdollahian and bin Zayed also held talks over the Ukraine conflict and political initiatives in the Persian Gulf region.

Bin Zayed also said his country is ready to develop economic and commercial ties with Iran. He also called for holding the session of the council of traders.  The UAE’s chief diplomat also invited Iranian teams to participate in the conference of renewable energies that will be held by Abu Dhabi.