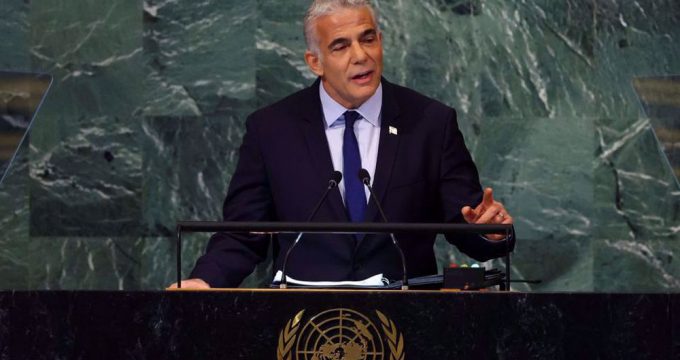 Spokesman for Iran’s Foreign Ministry, Nasser Kan’ani, wrote in a post published on his Twitter page that the head of the terrorist Tel Aviv regime exploited the UNGA podium just like his failed predecessor Benjamin Netanyahu to spread hatred and threaten the Iranian nation.

“It is their modus operandi to blackmail the world,” Kan’ani stated.

It is their modus operandi to blackmail the world.

Iran’s proven that it won’t hesitate to give a dreadful response to any aggression.

“Iran’s proven that it won’t hesitate to give a dreadful response to any aggression,” the senior Iranian diplomat pointed out.

In his UN speech, Lapid again denounced Iran and reasserted that the regime would do “whatever it takes” to stop Tehran from developing its nuclear program.

He added that, “The only way to stop Iran is to put a credible military threat on the table.

Lapid further claimed that Israel has the capabilities for such a measure, and that the Tel Aviv regime is not afraid to use them.

Israel, which pursues a policy of deliberate ambiguity about its nuclear weapons, is estimated to possess 200 to 400 nuclear warheads in its arsenal, making it the sole possessor of non-conventional arms in West Asia.

The illegitimate entity has, however, refused to either allow inspections of its military nuclear facilities or sign the NPT.

What has emboldened Tel Aviv to accelerate its nuclear activities, according to observers, is the support from the US and Europe, the two countries most critical of Iran’s peaceful nuclear program.

The regime has assassinated at least seven Iranian nuclear scientists and conducted a series of sabotage operations against the Islamic Republic’s nuclear facilities.

‘With its shameful record, US not qualified to talk about human rights’

Kan’ani also roundly dismissed US Sectary of State Antony Blinken’s latest remarks about the human rights condition in the Islamic Republic, stressing that Washington, with its dark and shameful record, has no qualification to make a comment about the issue.

“With a despicable human rights record both at home & abroad, how does the US have the audacity to give itself higher moral ground to lecture the world?” the top Iranian official tweeted.

He added that Blinken should bear in mind that he is the top diplomat of country, whose police forces have shot and killed 730 people, many of whom were black people, over a span of just 9 months.

With a despicable human rights record both at home & abroad, how does the US have the audacity to give itself higher moral ground to lecture the world?@SecBlinken needs to remember that he’s FM of a state whose police, just in 9 months, has fatally shot 730, many of them black. pic.twitter.com/J8UBYQAOpH

Protests have broken out in several Iranian cities over the death of a young woman, who died at hospital a few days after collapsing at a police station in the capital Tehran, where she and a group of others were receiving educational training on dress code rules.

Protests were reported in Mahsa Amini’s hometown of Saqqez, Tehran, and a number of other cities.

The protesters demanded clarification on circumstances surrounding the death of the 22-year-old woman.

Some protests have turned violent, leading to attacks on police and acts of vandalism.

The video rejected claims that she was beaten up, denying any physical contact against her.

Dr. Massoud Shirvani, a neurosurgeon, told IRIB TV2 television channel on Tuesday that the deceased woman had a brain tumor removed at the age of 8.

“Mahsa Amini was treated with drugs after the surgery under the supervision of an endocrinologist,” the physician said.