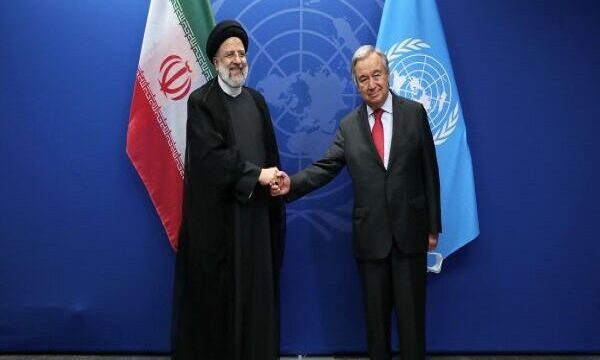 UN should truly be org. of nations rather org. of powers

President Raisi made the remarks in a meeting with UN Secretary-General Antonio Guterres on Thursday on the sidelines of the 77th United Nations General Assembly in New York.

Referring to the current crises in some countries of the region, the Iranian President considered the solution of all of them to be the formation of national dialogues without foreign interference and stated that it is necessary for the United Nations to play a more serious role against unilateralist behaviors.

President Raisi called Iran a friend in difficult times for its neighbors and referred to Iran’s humanitarian actions in providing shelter to Afghan immigrants and also serious fight against terrorism, adding,” On the other hand, the result of NATO and America in our region has been war, destruction, occupation, and murder.”

Emphasizing Iran’s support for regional dialogues to resolve issues between countries, the Iranian President called on the UN Secretary-General to implement justice.

Antonio Guterres, for his part, appreciated the continuous actions of the Islamic Republic of Iran in providing shelter to Afghan refugees and called Iran’s role in the Yemeni ceasefire praiseworthy.

“US withdrawal from the nuclear agreement was an unconstructive and very disappointing act,” he added elsewhere in his remarks.

Guterres considered Iran’s initiative to create a framework for regional dialogues as constructive and supported by the United Nations, and affirming the positions of the Islamic Republic of Iran on the issue of human rights, he said that human rights should not be used as a tool of war against countries.

Expressing his dissatisfaction with the non-suspension of sanctions against Iran despite the Covid-19 pandemic, Guterres said that Iran has an old civilization and is an indispensable and undeniable part of today’s world, and the considerations of the Islamic Republic of solving the problems of Yemen, Iraq, Syria, Lebanon, and Afghanistan by their people are sound and reasonable.