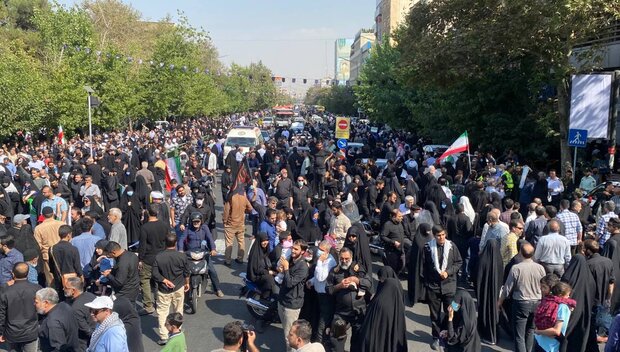 Millions of Iranians have taken to the streets across the vast country to condemn desecration of Islamic sanctities and acts of vandalism by rioters in the past few days.

The rallies, according to a statement by the Coordinating Council of Iran’s Islamic Propagation Organization, condemn “disruptive measures of few mercenaries and deceived individuals who insulted the sanctity of the Holy Quran and Prophet Muhammad (PBUH), set fire to a number of mosques and sacred flag of the Islamic Republic of Iran, assaulted the hijab of women, vandalized public properties, and undermined the security of people.”

The statement comes as street violence has erupted in the country after the death of Mahsa Amini, 22, in a hospital days after she was detained by police.

Despite clarification on circumstances surrounding the death of Amini, violent protests have led to attacks on security officers and acts of vandalism against public property as well as police vehicles and ambulances.

Iranian Health Ministry announced on Thursday that over 60 ambulances have been destroyed during the riots in several cities.

Describing the attacks on ambulances as an inhumane act and demanding that rioters be held accountable, the ministry said the move had disrupted emergency health services and the treatment process of patients.

Meanwhile, at least five security personnel have been killed while trying to confront riots in Mashhad, Quchan, Shiraz, Tabriz, and Karaj. Reports said several other security forces have been injured.

According to the IRIB News Agency, over a dozen people were also killed during the street violence.

There are also unconfirmed reports of car-ramming attacks against security forces.

In a statement on Thursday evening, Iran’s Intelligence Ministry warned rioters, noting that people’s participation in such gatherings is illegal and could result in judicial prosecution.

In a separate statement issued on the occasion of the start of Sacred Defense Week, Intelligence Minister Esmail Khatib noted that the dreams of enemies will not come true.

He assured the Iranian nation that the ministry is ready to foil the evil plans of enemies.

The intelligence forces, he continued, “warn internal and foreign seditionists that their mischievous dreams against religious values and great achievements of the Islamic Revolution will never be realized.”

In a statement on Friday, Iran’s Army strongly condemned violent riots which have led to acts of vandalism, undermined people’s security, and caused verbal attacks against the country’s security forces.

The enemies of Islamic Iran who have failed in different fields are exploiting every opportunity to compromise the peace and security of the people by staging riots.

Independence, authority, and security of Iran are indebted to the sacrifices of the children of this nation in the Armed Forces and hence, the country’s military forces will never let enemies misuse the current situation.

Iran’s Islamic Revolution Guards Corps (IRGC) had earlier issued a statement on the recent developments, noting that the current plot is also doomed to failure.

“The enemy’s recent plot, which is followed by collecting, unifying, organizing and training all the failed and scattered capacities and equipping them with weapons of violence and Daesh-style behavior, is a vain attempt and doomed to failure,” the IRGC said in the Thursday’s statement.

“The plot has resulted in nothing but shame and disgrace, and it will add another exemplary failure to the list of failures of the … anti-revolutionary front and the enemies of the Islamic Iran,” the statement added.

Expressing sympathy with Amini’s family and relatives, the IRGC called on the Iranian Judiciary to “identify and deal severely and fairly with rumor-mongers and those who spread false news on social media and on the street and who endanger the psychological safety of the society.”

A preliminary investigation carried out by the Iranian Parliament (Majlis) has also ruled out the use of force on the woman, pointing to her medical history and brain surgery years ago.