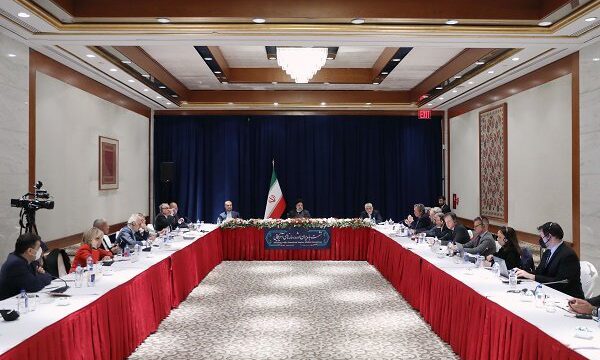 Iranian President Ebrahim Raisi says that IAEA’s anti-Iranian claims are baseless and are considered a mere political excuse to delay the revival of the nuclear agreement.

In a meeting with a group of senior managers of the American media on Thursday morning on the fourth day of his trip to New York, Ebrahim Raisi answered their questions and also explained the views and positions of the Islamic Republic of Iran.

In response to a question about Iran’s conditions in the nuclear issue, the president said, “US withdrew from the agreement and the Europeans refused to fulfill their obligations towards it, while the Islamic Republic of Iran, according to the 15 consecutive official reports  issued  the International Atomic Energy Agency as a monitoring body, fulfilled its obligations”.

Emphasizing that Iran also wants the alleged safeguards issues to be closed once and for all, the president stated, “Our nuclear activities have been under the IAEAC supervision for years, and there is no mention of violations of regulations in the Agency’s reports”.

He called the recent Agency’s positions regarding Iran’s nuclear activities political and non-technical and influenced by Western and Zionist pressures and said, “The safeguard claims against Iran are based on the claims of the Zionist Regime, which based on the experience of their sabotage and conspiratorial actions against Iran’s nuclear facilities, are fundamentally invalid, and re-introduction of similar claims that have already been investigated and declared baseless by the IAEA is considered a mere political excuse to delay the revival of the agreement”.

The President clarified, “If the safeguards case related to the past are not resolved once and for all, what guarantee is there that shortly after the agreement, Western countries will not organize actions against Iran based on these claims?”

President Raisi added, “Every individual and group needs certainty and predictability for their economic activity, while these claims remain open, business people and economic enterprises face uncertainty for their activities with Iran.”

“Therefore, achieving a logical and fair agreement depends on providing reliable and reassuring guarantees, closing the case of alleged safeguards issues and permanently lifting the sanctions,” he emphasized.

In response to the question of why you refuse to negotiate directly with the US, the President said, “We have experienced direct negotiation with America and we have found that there is no benefit from it. If the Americans are telling the truth and are honest, they should fulfill their obligations”.

In response to the question of how do you expect the current US government to provide you with guarantees on behalf of future governments, President Raisi stated, “Are the obligations of the countries in the bilateral, regional and international stages the responsibility of the head of the government or the that government is the legal representative for a nation and a political system? If it is done as you say, the issue of interactions and agreements between countries or the interaction of countries in the framework of treaties and international organizations will no longer have any validity.”

Regarding the government’s approach to bilateral and international interactions, the president clarified, “Our foreign policy is based on interaction with all friendly countries with priority to neighboring countries and the region”.

In response to the request of one of the participants in the meeting to mediate in order to end the conflict in Ukraine, the Iranian President said, “We are against any kind of war and conflict in view of the bitter experience of the 8-year war we had, and we will use all our power and connections to end this conflict”.

In response to a question about the position of the Islamic Republic of Iran regarding the Zionist Regime and the solution to the Palestinian issue, the President said, “The Palestinian people of different religions lived in their ancestral land for thousands of years, but their homes and houses have been occupied for 70 years and they are displaced in their own land or like Gaza where their place of residence has turned into a massive prison.”

He continued, “The solution to this problem is not agreements like Camp David, Sharm el-Sheikh or Oslo, because these agreements could not solve the problem of the historical inhabitants of this land and do not give them their rights”.

The President described the solution to the Palestinian issue as the proposal of the Islamic Republic of Iran at the initiative of the Leader of the Islamic Revolution, which was also registered as a document in the Security Council and is completely compatible with the claims of Western countries to support democracy.

Ebrahim Raeisi added, “Holding a free election with the participation of all Palestinians, regardless of whether they are Jews, Christians or Muslims, will lead to the establishment of a government that can solve the problems of the Palestinians and provide for their rights”.

The President stated, “The solution of relying on the opinion and resolve of the people of each country can also solve the problem of Yemen, Syria and Afghanistan. Therefore, the problem of these countries should be resolved through dialogue and understanding between the people of these countries, and foreign interference in their affairs should be seriously avoided because their people can decide for their own future”.

Criticizing the deeply double standards of the West in the issue of human rights, the president noted, “Every day in various countries, including the United States and European countries, we see that men and women lose their lives by the police actions, but there is no sensitivity for finding the cause and deal with these violence.”