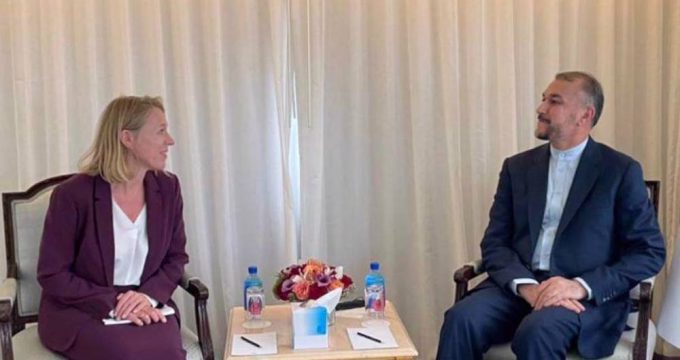 Iranian Foreign Minister Hossein AmirAbdollahian says if the United States has the necessary will to revive the 2015 nuclear deal, an agreement can be reached soon.

“If the United States has the required will, an agreement is still accessible,” AmirAbdollahian said in a meeting with Norwegian Foreign Minister Anniken Huitfeldt in New York.

“The International Atomic Energy Agency (IAEA) should act in accordance with its duties and technical responsibilities and distance itself from the political and dual approaches regarding [Iran’s] peaceful nuclear program,” he added.

The United States, under former president Donald Trump, abandoned the nuclear deal, formally known as the Joint Comprehensive Plan of Action (JCPOA), in May 2018 and reinstated unilateral sanctions that the agreement had lifted.

The talks to salvage the agreement kicked off in the Austrian capital of Vienna in April last year, months after Joe Biden succeeded Trump, with the intention of examining Washington’s seriousness in rejoining the deal and removing anti-Iran sanctions.

In recent weeks, there have been unfruitful, indirect exchanges of responses between Tehran and Washington over an EU draft proposal on restoring the JCPOA, with Iranian officials urging their American counterparts to show “realism” and “flexibility” in order to secure a deal.

European diplomats say talks now appear headed toward a pause until after the US mid-term elections on November 8.

The Iranian foreign minister also told his Norwegian counterpart that Tehran is ready to increase contacts with Oslo and to set out a clear path for deepening bilateral cooperation.

AmirAbdollahian stressed the importance of making use of the existing and diverse capacities of both countries to improve relations.

For her part, Huitfeldt said Norway is interested in the settlement of differences over the JCPOA revival.

She also called for the expansion of Oslo’s cooperation with Tehran.

During the meeting, the top Iranian and Norwegian diplomats also discussed the latest regional and international developments.