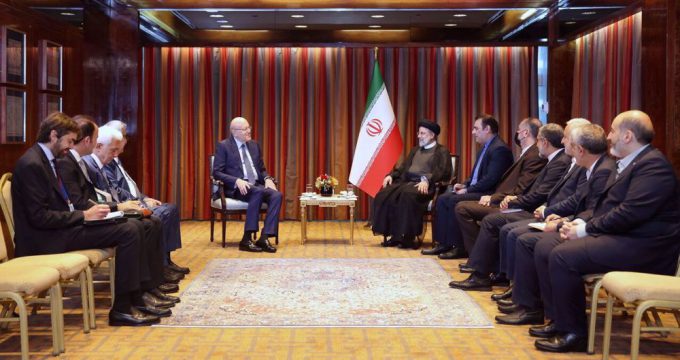 President Ebrahim Raisi says Lebanon proved that resistance is the only means to stop the Israeli regime’s savagery and aggression.

The Iranian chief executive made the remarks on Wednesday at a meeting with his Lebanese Prime Minister Najib Mikati on the sidelines of the 77th session of the UN General Assembly.

Raisi said Lebanon is at “the forefront of resistance” against the Israeli regime, referring to the country’s decades-old history of confronting the occupying entity.

Lebanon’s Hezbollah resistance movement fought off two Israeli wars against the country in 2000 and 2006, forcing a humiliating retreat upon the Tel Aviv regime’s military on both occasions.

The movement has vowed to resolutely defend Lebanon in case the regime chose to impose another war on the country.

“Those, who used to consider that the Zionist regime and its supporters could be confronted through [some] means other than resistance, have realized their mistake, and are changing their [respective] approaches,” Raisi said.

The Iranian chief executive reiterated that the Islamic Republic supports whatever measure and procedure that could contribute to stability and security in Lebanon.

Raisi urged that formation of a “powerful and authoritative” government was of great strategic significance for Lebanon, highlighting the importance that unity among all Lebanese ethnicities, religious factions, and groups played in bringing about the prospect.

The enemy, the Iranian president concluded, was trying to create the impression that the state of affairs in the region favors the United States and the Israeli regime. This is while normalization of relations between some regional states and the Zionist regime does not contribute to the occupying regime’s security, and even deepens the regional peoples’ antipathy towards Tel Aviv, he added.

For his part, the Lebanese premier Mikati said relationship between Iran and Lebanon was at “a very good” status, saying Beirut had invariably sought to have very favorable ties with Tehran, and expressing his readiness to travel to the Islamic Republic in the near future.

‘Iran-Japan ties impervious to US sanctions’

Also on Wednesday, the Iranian president met with Japan’s Prime Minister Fumio Kishida, discussing with him the United States’ unilateral withdrawal from the 2015 nuclear deal, and Washington’s reinstatement of the sanctions that the agreement had lifted.

“It is necessary [for us] to find innovative means to prevent the US’s unilateral and oppressive sanctions from affecting Iran and Japan’s relations,” Raisi said.

Raisi said Iran’s economic relations with many countries are developing, noting that due to the long history of cooperation between Iran and Japan, and numerous field of cooperation including development of Chabahar port, as well as health and environment sectors,” the bilateral relations can be increasingly strengthened.”

Referring to the US withdrawal from the nuclear deal, the Iranian president said, “We are ready to reach a fair agreement and we stress that, considering the negative history of the United States, it is necessary to secure guarantees to prevent the repetition of that bitter experience.

Raisi also described Iran’s dialogue with regional countries as positive, stressing that the success of these dialogues hinges on non-interference of certain foreign countries in regional affairs.

The Japanese prime minister, for his part, pointed to the current cooperation between the two countries in the fields of health, water, environment and crisis prevention, and announced Tokyo’s readiness to increase such cooperation with Tehran in various areas.