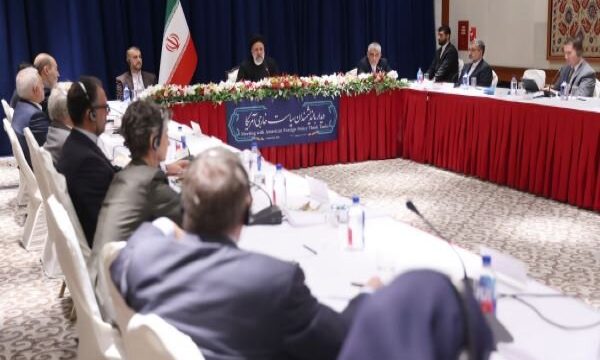 Raisi says Iran’s case in IAEA should be closed

Iran’s case in the International Atomic Energy Agency should be closed so that it is not misused as a pressure lever in JCPOA talks, President Raisi said.

President  Seyyed Ebrahim Raisi had a meeting with a group of American foreign policy experts on the third day of his trip to New York and answered their questions.

President in response to a question about whether Iran is willing to agree on nuclear negotiations or not. He said, “The Islamic Republic of Iran has not withdrawn from the existing agreement and has fulfilled all its obligations in this agreement. It was the United States that withdrew from this agreement, and it was the European countries that did not fulfill their obligations.”

Ayatollah Raisi stated, “The International Atomic Energy Agency has so far emphasized 15 times that the nuclear activities of the Islamic Republic of Iran are peaceful and do not deviate from the Agency’s regulations. Are these reports invalid for Western countries?”

“In the same region where Iran is located, how many other countries have nuclear activities and even activities related to the production of nuclear weapons? How much of their activities are under the supervision of the IAEA, and even though they are making nuclear weapons, neither the IAEA nor some countries in the world are sensitive to them,” he said in response to a statement that the International Atomic Energy Agency is an independent and non-political institution.